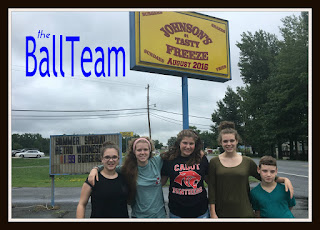 The August Splash 2016 was meant to be a nod to summer - almost at an end - and a nod to Tasty Freeze, where our two oldest work and where our family now spends at least one night a week - letting our big ladies cook us supper. 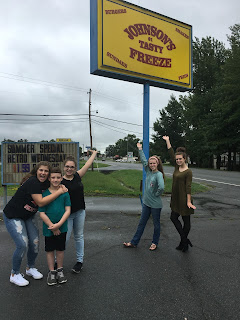 Rachel and Samantha - the current crew - and then Charlotte, Josephine and JMichael - the future crew? 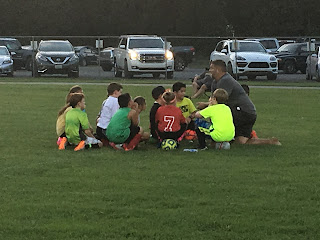 Every sport that JMichael saw on the Olympics this summer was his new favorite.  He wants to play volleyball on the beach, jump over fences with a horse, sprint with Usain Bolt (he followed Usain with superfan admiration) and swim relays with Michael Phelps.  This boy is truly all about sports.  Lucky for us, his favorite coach is moving up through the levels of soccer with him, and the season has begun.  He will play on a bigger field this year - 7 on 7, with a keeper.  He's crazy excited.  Everyday when he gets dressed for school he says, do I go to practice today?  He is making new friends on his bigger team and his coach noticed that he had improved in the off season - he said, Coach Michael - look what I can do!  Then JMichael proceeded to do his rainbow (which I don't have a clip of him doing, but, click here to see what it is) and Coach Michael was impressed.  He said, Wow, JMichael.  You've been working!  And he has.  Almost daily.  From inside the house you can hear the ball hitting the garage outside because JMichael is out there shooting and dribbling.  He loves it, and his work is paying off.

Coach Michael James is the barefooted big kid pictured toward the right in the picture above - in the grey shirt up on one knee.  JMichael is to the left side of the photo - directly in front of his coach and wearing a white shirt. 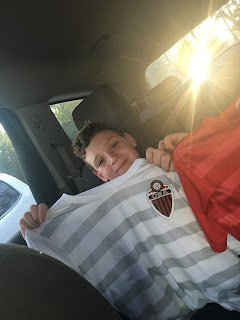 Every kids needs a sport, a hobby, a thing.  It gives that kid a place to shine and build confidence and skills.  Sports are good for JMichael and James and I love to watch him slay it. 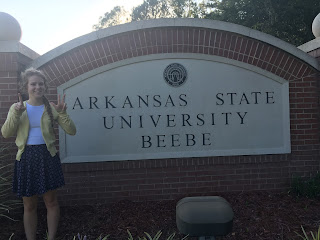 Rachel is a freshman, again.  She's attending Arkansas State University - Beebe.  ASU, as it's called, is a pretty big university with four campuses; Beebe is the closest and the smallest.  Her apartment is about ten minutes from school and Tasty Freeze is working around her schedule - class every morning until about noon, then she works every afternoon/evening and doubles on Saturday - 'cause she's doing this all on her own.  You know you raise your kids to be individuals, problem solvers and independent.  Then, they actually do it.  I filled out the parent portion of the financial aid applications, but, she did all the leg work, supplied her transcript and shot records and tax forms, registered, applied for grants and loans, and set her own schedule.

Her plan is to finish her core classes here locally and then transfer to get her degree in American Sign Language.  There are two universities in state that offer her program - one about forty-five minutes south - in Little Rock at the University of Arkansas - and one about two hours north - in Jonesboro at ASU Jonesboro.  She says Jonesboro is too far from home/work/friends and her boyfriend.  But, two years is still two years away.  For now, she's staying local and making ends meet - with the occasional grocery trip and tank of gas from good ole' Mom and Dad.  Go get 'em, Rae. 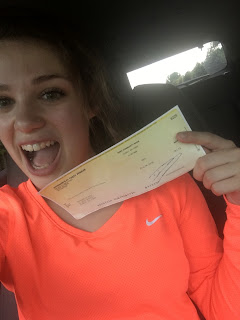 Samantha has always been bold.  She speaks her mind; she has opinions; she knows her mind.  Every time I go to the store she gives me a list.  Every.  Time.  She needs mascara, makeup remover wipes, contact solution, a watermelon, gatorades, gum for school, another mascara, hair straightening spray stuff, starburst, deodorant, a certain shampoo, another mascara....you get the idea.  The others just tell me what they want for suppers next week, or maybe ask for a certain school snack to take to class, but, Samantha's list is always very specific and involved.  She usually gets it, too.  She keeps her room decently clean, she's good about chores and she's otherwise busy with school, homework, dance, and now we can add work to her list.

But no more - or at least not as much - she's discovered the big upside of having a job - she gets a paycheck!  Now let's see how quickly she goes through those makeup remover wipes!

The obligatory first day of school pictures were different this year for two reasons - one significant, and one bothersome.  First, the bothersome - it's raining!  We have never had a rainy first day of school before and it made pictures more complicated - though they still turned out great, I think - and it made traffic beastly.  Buses were late, people forgot how to drive, parents dropped kids only at the doors of the school and not in the whole line - it was a mess.

The second difference is that we are down by one - Rachel graduated and I will have pictures of her beginning college when that happens later on.  For now, we are four.....Samantha is a senior and she is not happy about it.  She has decided being an adult may be hard and she, bless her homebody heart, is cherishing these last months as a student and big kid.  Charlotte is in eighth grade and for the first time in her life she is not playing a sport.  This year she joined choir and is shinning.  She feels a little behind the curve because all the girls with her have had voice lessons and previous training.  But like Samantha with six years on dance team and never had a class, Charlotte may just take over choir with her natural bravado and confidence.  Josephine is in sixth grade and at the top of the middle school food chain.  She's in some advanced classes and gets to move independently for part of her school day.  She likes her team and has some old friends in her classes, but, she is making new friends, too.  Her third grade teacher is also in the sixth grade now, so she has Mrs. Eastham again for language and literacy - her favorite!  JMichael is in the third grade and school is still so fun for him.  He says he is the fastest kid in his class and his best buddy, Malachi, is also in his class.  He already, after a week of class, has a girlfriend - his old flame Harper - and so he is back in his old swing - third grade is friends and fun, with a little math - his favorite - and some reading thrown in, because they make him do it.   (His dysgraphia and dyslexia classes are helping, but, reading is challenge.  He's doing great and his teachers are amazing.) 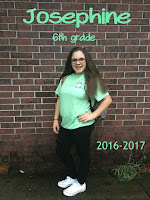 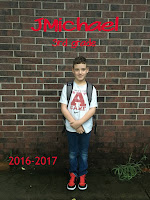 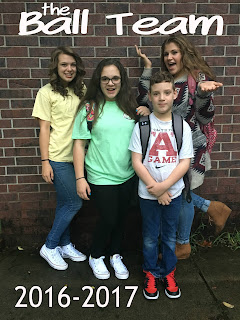 Tasty Freeze - the Dynasty is born 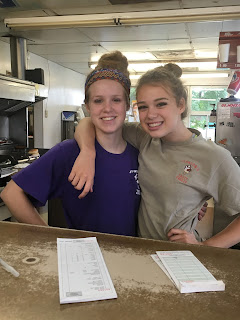 Rachel has been at Tasty Freeze for well over a year now - and when Samantha turned 17 I told her it was high time she got a job too.  So where do you apply when your sister is the shift leader at the local hang out burger and shake joint?  Yes, Tasty Freeze.  Samantha applied and interviewed and they actually work really well together.  The owner asked Rachel before hiring Samantha if they get along.  Rachel replied, well we shared a room for 17 years.  We get along just great.  And I'd love to be her official boss.  So far it's working out fine.  Samantha likes working, loves tips, and they can run the store.  It's kind of amazing to me - working the grills, handling money, dealing with customers.  I'm very proud of them both.  My big ladies - making their way in the world.  Charlotte and Josephine, by the way, fully intend on working at Tasty Freeze, too.  Fine by me.  On a side note, the owner doesn't hire boys.  He only hires girls.  So JMichael will be on his own!