April Fools - Rachel is not really pulling a little Samantha out of a bag of cheese balls, held by a giant Charlotte while tiny little Josephine and JMichael sit quietly by. 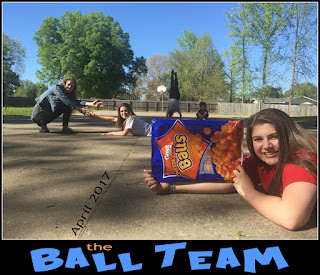 Instead, Josephine is doing a handstand.  Happy April Fools from the Ball Team. 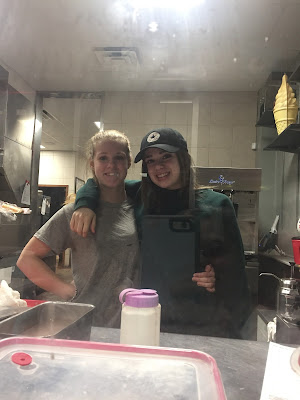 Prom was on Saturday, April 22, 2017.  It is Samantha's senior year.  Here she is, prom night, pictured with Rachel, whose prom was this time last year, and who did exactly what her sister did - she worked.

These two amazing young ladies are all about doing things their way.  I made sure to impress upon each of them, You will only get one senior prom.  One.  If you do not go, that's up to you.  But you will never be a high school senior on prom night again.

Neither of them went to prom.  They were both asked, actually by multiple people.  They both have a grandmother who sews and could have had a custom dress.  Nope.  Rachel had finished school in the December before prom in April and she just didn't hang out with high school kids anymore.  Samantha said it's all about getting dressed up for pictures only to go to the after party in shorts and a tshirt, so what's the point?

She's not wrong.  The school district throws a huge after-party with bouncy blow up trampolines, roly-poly suits, door prizes like laptops and dorm sized fridges, and tons of free food - the community donates it all and the students are encouraged to come - no admission.  This year they had a hypnotist and a DJ from the big pop station in Little Rock, Alice 107.7.  But were my kids there?  Nope.  Working.

Samantha did go hang out with a few friends after work that night, who did go to prom, but, true to her words, only stayed a little while and then chilled with a bonfire and movies until late. 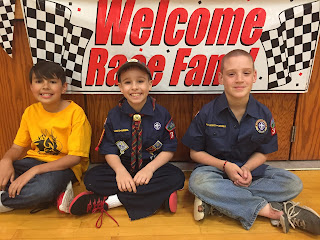 Cub scouts is great fun for our little man.  He gets to hang out with all boys and build a race car.  I haven't told him yet about cub day camp this summer.  He will be in heaven.  Here he is - far right - sitting with Derek and Israel, before the racing began. 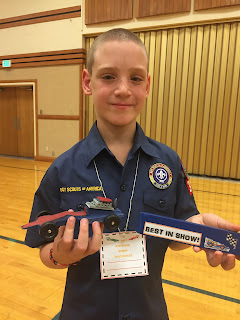 And now here he is at the end of a fun evening - including a cub inspired dinner of hot dogs, chips and cookies - he didn't place.  But that's okay; he got best in show and had fun with his friends.  The racing was pretty intense.  JMichael's car actually won a few races by placing it backwards on the track.  I didn't get a picture of the track - quite a chore to assemble, but, wow, it's fast and the boys thought it was great.  Some older kids - the Murphey's boys (Shane and Ryan) ran the program which decided who races when and where and against whom.  It was a double elimination round robin tournament.  Every car in every lane, twice, and against every other car in the pack.  It sounded pretty complicated, but, they handled it all.  Some families brought cars from years past and afterward the cubs finished their cars, we had a few fun heats with now retired family cars.  It was a great activity and I think we learned a few tricks to apply to next year's car - like start working on the car earlier than the day before the race! 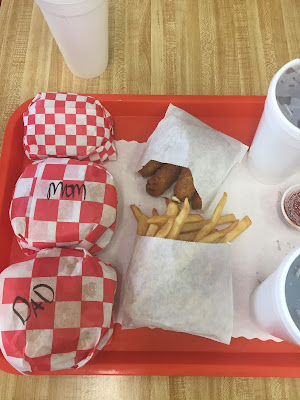 As our kids have jobs and social lives, James and I are finding ourselves able to have a simple dinner out.  Yes.  I just said we go out when we can and more particularly when we can get away with going with only the two of us, or with JMichael.  This particular night Rachel and Samantha were working at Tasty Freeze, Charlotte and Josephine were staying at friends' houses for the night, and we went out with JMichael, to Tasty Freeze, of course.  Our meal came with these markings.  Gotta love having an "in" at the local burger joint.  Great personalized service.  Of course, they know we tip well, too.

Warning - Lots of pictures in this one!

So James and I have now been married for twenty years.  Twenty.  Wow.  We used to joke that if we made it to five years he would not be able to "deselect me", as he called it.  We flew past five and now we are working on our second set of twenty.  Then another.  Then another....

A few photos of the early days, and more recently: 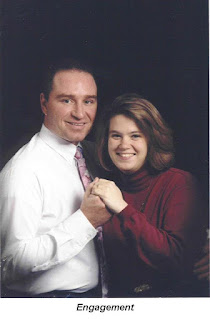 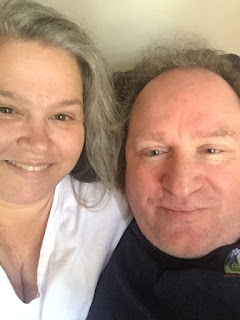 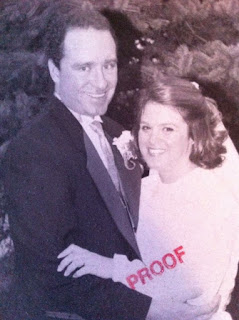 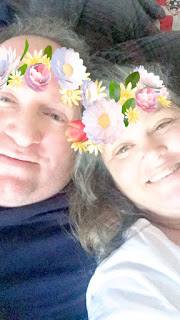 For this big occasion, Ma sent us away to Mt. Magazine, the highest point in the beautiful state of Arkansas.  The road was super windy and crazy scary.  James drove and I held on tight.  I'm a flatland kinda girl. 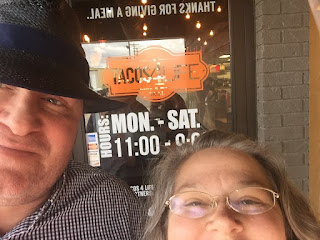 We stopped in Conway on the way up there at a place I've heard a lot about and wanted to try - Tacos 4 Life.  The food was amazing - cilantro rice with two tacos.  James and I got two different ones and split them.  He ordered fish - excellent - and I ordered Cuban - also excellent.  I highly recommend this place.  It was pricier than we would normally do (Ma also send a gift card for spending money, thank you!) but they also donate to charity for every taco they sell. 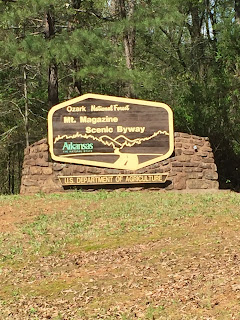 We started our climb up the mountain.  It was a beautiful spring day. 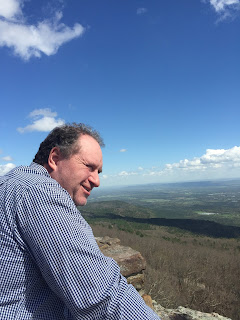 Stopping at the scenic overlook, you could literally see for miles. 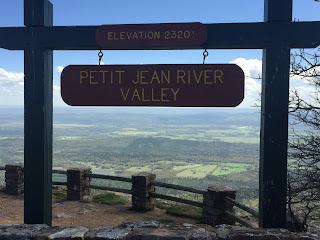 The elevation reaches approximately 2,500 feet at the top of Mt. Magazine. 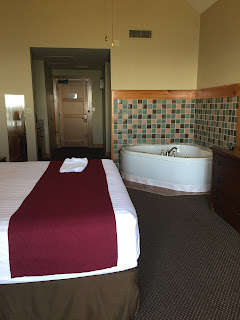 Our digs for the night - a hot tub and cable TV.  It was great.  We watched the North Carolina Tarheels defeat the Gonzaga Bulldogs in the college basketball championship while we ate room service appetizers and relaxed.  I was for NC and James wanted Gonzaga.  It was a great game. 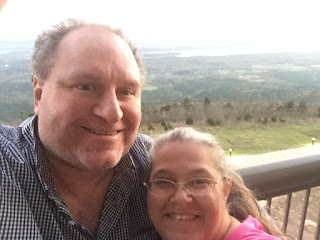 Our view from the balcony in our room.  Spectacular. 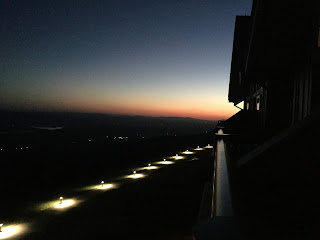 The sunset from our balcony.

Twenty years.  I did have a life before I was married.  Some of my readers may remember me then.  It is strange to me that I don't really see myself except as a wife and mom.  I mean I am my own person, don't get me wrong, but, James is such an amazing part of my life that I would be a completely different person without him.  He is funny and smart, spiritual and playful.  He is a great Dad to our family and a leader both in our home and among his peers.  We work well together, because we are different people with the same goals.  For example, he thought the Zags could beat the Tarheels.  Sometimes he wins.  Sometimes I win.  Together, we both win.