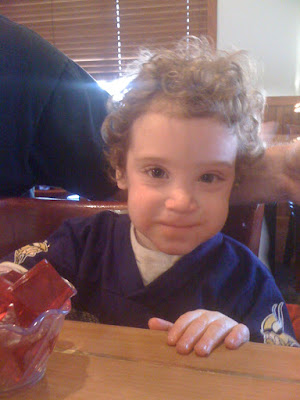 Deuce is deux. Two whole years of living, playing, growing and eating. (This boy can eat.) For his birthday we had a cookie-cake. He didn't enjoy the candles and his sisters helped him by blowing them out. Maybe next year. 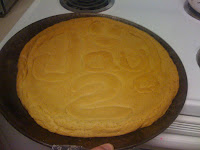 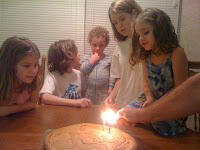 We went out for Chinese food with one set of grandparents and opened gifts from another set. We had ice cream cones and an afternoon at the playground, complete with a soccer ball. 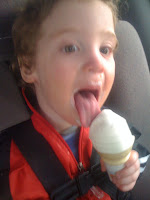 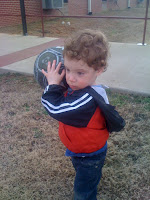 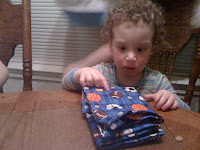 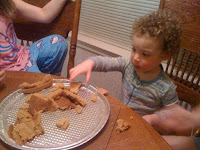 Maybe he did spend his first two weeks of life pinned down in a NICU crib, but, he's been making up for it ever since. At two, Jay can say about two dozen words, put his clothes in the laundry pile, find his shoes and drive his trucks all over the house. He throws every ball he finds. Every ball. He gives kisses, "reads" his books and fetches his own diapers. He's brilliant, funny and resourceful. Jay knows exactly which sister to go to for whatever he needs (Rachel fills his water cup, Samantha gives piggy-back rides...)
Isn't he just adorable? We love you, Jay.
Happy Birthday. 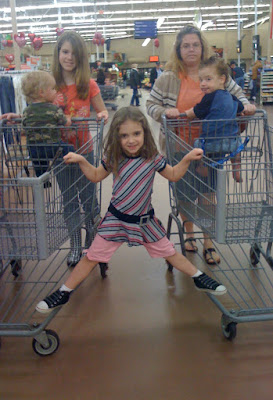 Now THIS is how you ride a cart!
Josephine, Age 5

I was checking out at the store today, and as I did, I overheard:

Josephine (age 5): Jay, I was good, so I am getting Skittles.
Jay (age 2): looks at his sister and smiles
Josephine: What are you getting, Jay?
Jay: smiles again at his sister
Josephine: You were good, too. You get diapers. 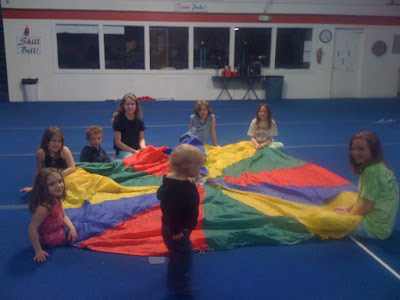 Samantha (10 years old) competes for a local gymnastics team. She trains nine hours a week at the gym. She works hard and has the skills to prove it. All this athletic ability is fantastic for her and she loves to practice. I am so thankful to the gym that allows her to let her talent shine. I am also truly thankful that they allow me to trade her coaching fees, some of them, anyway, for my cleaning services. I vacuum and clean the gym every week. Big place, lots of vacuuming, but, a great opportunity for Samantha. Another perk is that while I am cleaning, the kids get to play there. SO FUN! Bouncey floors, two huge trampolines, balance beams, mats, mats, mats and a big foam pit! During our snow days this week, all the kids, plus three lucky friends got to go with me to the gym. Some photos of the fun: 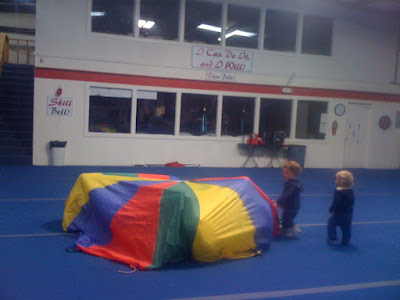 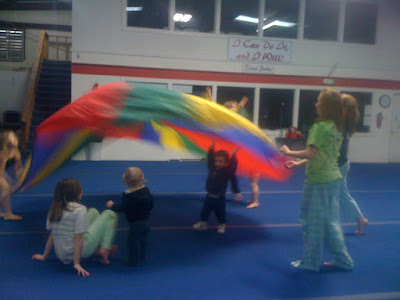 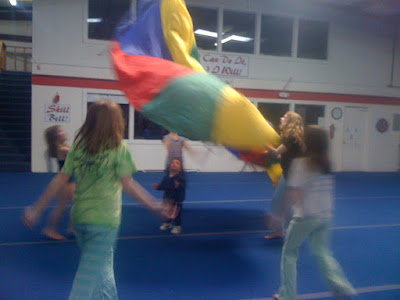 There was plenty more fun, but, I only took a break to take pictures while the big kids entertained the little kids with the chute.

We had four inches of powdery snow. Since we aren't too used to snow, the ladies don't know how to roll the snow into a ball. This snowman came from the "mound" method. They did give it a good try. The food coloring gives it that modern look, don't you think?

When I was a kid, football season was time spent with Dad. Some of my earliest childhood memories are of my Dad explaining to me what clipping is, or how the yards to downs ratios were calculated. Dad's team has always been the Rams, no matter what city they happen to be residing in. My team was the New Orleans Saints. I choose them because they had a French connection and because I liked the colors. They looked menacing on the field. From their earliest years, however, the Saints were hardly menacing. Years of losing seasons, coaching changes and injuries brought no superbowl dreams. Most years, the Saints never even had a chance to make it into the playoffs. But this year, oh, THIS year. Win, then win, win again. Do I dare hope? Win again, win. WOW. The season finished 13 - 3. The three losses were at the end of the season, after the playoffs were assured. Then the playoffs. The right teams lost, the right teams won. YES. And the superbowl? YES! Go Saints. I will be your fan, win or lose. The winning seasons are sure fun!


On a side note, I have to add that James' team is the Minnesota Vikings. Always has been, since he was a kid, too. He and his Dad had the same at-the-knee football lessons, but, his carried him on to play the game and his high school team even took the state championship - the state of Texas, no less! Big football there in Texas. Anyway, his Vikings had a dream season, too, and the NFC divisional playoff (the game that decides which team goes to the superbowl) was between the Vikings and the Saints. We were rooting for opposing sides, but, we kept our heads and our rivalry, as well as our marriage, survived.