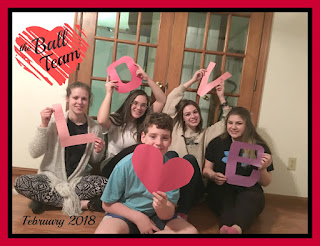 I think the Beatles said it best - All you need is love.  We do have that.  We even cut it out in construction paper letters to show it.  My only story about Valentine's day this year is all about candy.  I am a fan of the Necco wafers.  They are hard to find, but, I do love them.  At Valentine's Day, Necco puts out their conversation hearts.  You know the ones.  Our candy dish is full of them.  Our candy dish empties regularly.  Sometimes it is gone in a day.  Conversation hearts are a family favorite.  We give them to each other - text me; we make fun of each other - sweet girl; we just conversate with them.  After Valentine's day, our local grocery had them on sale.  They had a shopping buggy full of them for $.49 a bag!  Really?  I wanted to just push the buggy up through the checkout line, but, I showed a little restraint and only bought about fifteen bags.  I'm thinking our candy dish will be conversation hearts until Mother's Day.

A trip to New York City.  By way of background, let me tell you a little about our oldest child.  She is scared of heights.  We learned this fact about her at the same time she learned it - at a Cheetah Girls Concert when she was about eleven. Our seats were nose bleeds, and that's when Rachel discovered her fear of heights.  Good show, though, once you're seated...

So what do I think is a great birthday getaway?  The most crowded and loudest city on the eastern seaboard.  Going up in the Empire State Building was on my bucket list, but, out of the question. 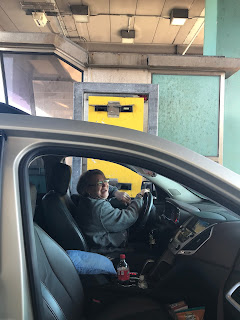 We drove.  Mom has been to New York a few times and was our guide for the day.  Now I feel like I could do, it, but, I' not driving in the City.  We took the turnpike through New Jersey, so as to avoid as much of the state as possible.  Nothing good happens in New Jersey.  At least, not to me.  One funny thing about new Jersey, though, is that it was built by tall idiots.  This is the toll booth.  I had to take a picture.  How is a driver supposed to reach a ticket way up there?  (Yes, I know it's for semi trucks....) 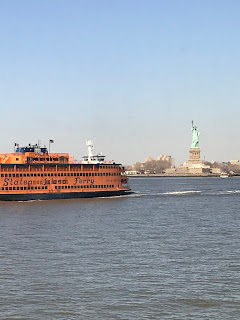 We took the Staten Island Ferry into Lower Manhattan.  It was a chilly day, but, hardly cold.  Yes, the ferry was full, and there were crowds and Rachel was not having it.  I told her to consider it immersion therapy and then she stopped talking to me for a while.  This country girl was not up for a city adventure. 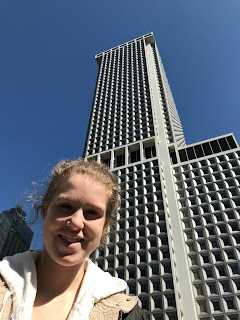 She did force a smile for this picture and was warming up once on dry land again.  There is an excitement in the City, and Rachel eventually said she was happy she was forced to come. Evan, by contrast, was excited to see New York and took in as much as he could while comforting Rachel at the same time.  We had authentic New York pizza for lunch, although it was so good that we ate it before getting a picture. 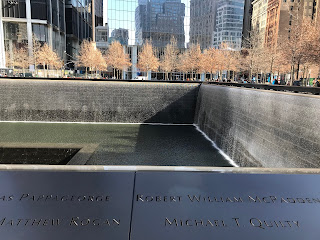 We walked around Lower Manhattan.  We went to the 911 Memorial.  Very humbling and serene amidst the City noise. 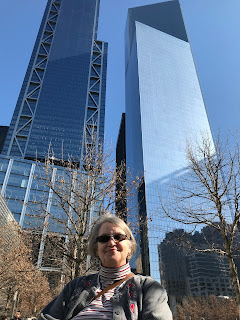 Ma, in the sky scrapers. 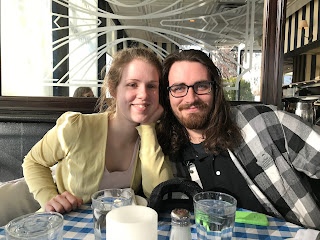 We found a walkway on the East River, avoiding the noisy city streets.  It was a beautifully landscaped brick walkway along the East River from about Tribecca to Battery Park.  Moms were jogging with babies in strollers, couples were walking, men in suits were talking on cell phones and we strolled.  It was a surprisingly tranquil and ordinary walk.  We happened upon a restaurant, and we thought we would get a snack.  So we ordered some lemonades and a giant pretzel and some spinach dip.  Fine snack for four, right? 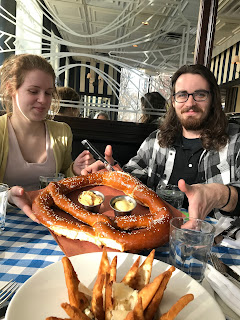 This is the Giant Pretzel.  GIANT.  It was delicious, by the way. 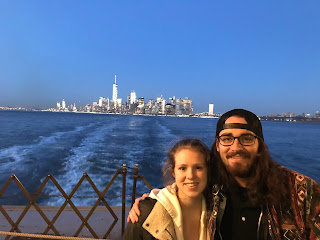 There's the soon to be birthday girl.  We are leaving, so she's smiling.  The lights are coming on in the buildings and I took this picture from the back on the Staten Island Ferry.  Seriously, she did enjoy her surprise trip.  Maybe net time I try to cure her phobias I will give her a little notice.  Happy Twentieth, Rachel Mae.

Rachel is in the Kent County News 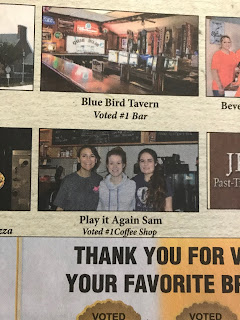 Rachel is pictured here, with her co-workers, on the very last day she worked at Play It Again, Sam's.  How amazing is that?  Her very last day, and the newspaper shows up to take her photo as a worker in the best coffee shop in town.  The girl to Rachel's left was starting work that day - Rachel was training her.  To Rachel's right is Jessica, her friend and co-worker.

In our family, each person has a football team.  We don't all root for the same team; that would be too easy.  Instead, we all root against each other.  Here's our list:

This season - 2017 - 2018 -- Of the eight of us, five were in the playoffs.  The big dance came down to two of us - Rachel versus JMichael.  It was tense.  JMichael was a valiant fan and played a good game, but, in the end, Rachel and her Eagles were victorious.  Rachel watched the game at a friends house, and JMichael watched at home with us.

My brothers have teams, too - David roots for the Baltimore Ravens, his wife Dawn roots for the Kansas City Chiefs, and Eric and Abby are Cowboys fans through and through.  Mom and Dad cheered for the Rams, even through all their changes of venue.  I remember one Superbowl that Dad was so excited about - the Rams were playing, and to make it even better - Tina Turner was the halftime show.  The Rams lost, but, Dad was still happy.

It'll be a long off season, full of talk on drafts and trades.  Long live football!