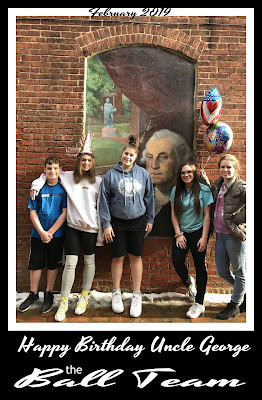 Once upon a time, a man named Augustine Washington (born in Virginia, 1694) married a woman named Mary Ball (born in Virginia, 1708).  "Gus" was looking for a wife and a mother of his four children, since his first wife, Jane Butler had just died.  Mary was an orphan and only 22 years old when they married in 1731.

Gus and Mary went on to have six children - the oldest of which is George Washington, Founding Father and First President of the United States.  As you follow Mary Ball Washington's family through her brother, Joseph, you come down fourteen generations to James Elmer Ball (born in Mississippi, 1938), and then generation fifteen, James Micheal Ball (born in Ohio, 1966).  This is generation sixteen - our family.  Our ladies and JMichael are the sixteenth generation from President George Washington and the splash this month honors our dear Uncle George for his birthday.  George Washington was born on February 22, 1732 and so in 2019 he would have turned 287 years old.  Wow.

This painting of George is in an alley near Bee Crafty - the craft and antique store where I work weekends and sell items out of.  Washington is pretty big here because of Washington College, which is also depicted in the painted scene - tenth oldest college in the nation, the only college George publicly supported with money (10 guineas) and visits, and my alma mater.

Since I'm certain that George had a great sense of humor, we had fun with him, too.  A few more pictures of our Uncle George..... 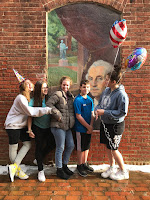 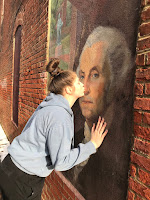 The BallTeam laughing about a story George just told us (what amazing stories he could tell), and Charlotte giving Uncle George some love. 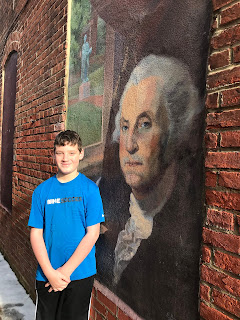 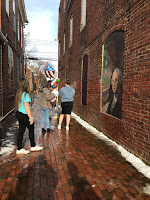 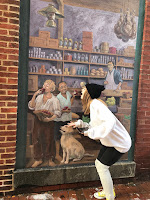 This picture gives a little perspective of the alley and the windows that are painted with colonial scenes.  And Samantha, taking a bite of an apple while petting the dog at the General Store. 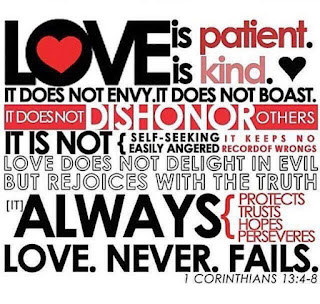 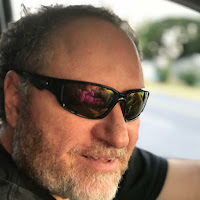 I don't put much on here about us - James and me.  I consider this more as the chronicle of the ladies and JMichael.  But look at this picture!  Isn't he suave and handsome?  James is home, usually medicated enough to be comfortable.  He can be found around the house, fixing supper, playing video games and playing guitar.  He is our local tech guy and the ladies'/JMichael's biggest fan.  Honestly, he doesn't live the life he wanted - his injuries kept him from that.  But he reads and plans and one day we - the two of us - will hit the road and visit these children we will soon enough send out into the world.  I'm looking forward to that day, while trying to enjoy the journey.  Happy Valentine's Day, James. 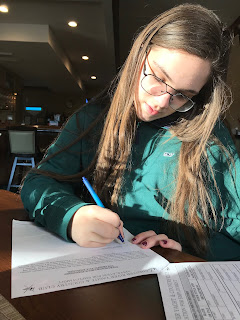 Josephine is pictured here doing something quite mature for her fourteen years - filling out her first job application.  She's old enough to work for the summer at the pool cabana at the local country club - if she gets the job.  Not a bad gig at minimum wage (currently that's $10.10 an hour!) plus tips.  Here's hoping she gets the job!  She's saving for a car already.