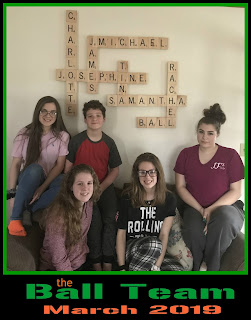 The March splash is at our house.  The weather was not cooperating and Charlotte, as you might could figure out from her expression, was not feeling good; she's super nauseous.  I made the scrabble tiles wall hanging from a post I saw and the goods from Mom for Christmas.  The hardest part was hanging it straight.  An indoor day, not to our liking, but, it is what it is.  In like a lion and out like a lamb, right?  March Splash, 2019 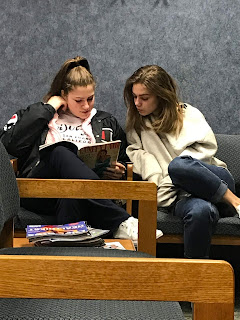 Samantha had to get her wisdom teeth extracted.  Three of them.  That in and of itself is a lot, but, she also had three other teeth that had to come out so she was having six extractions today.  I captured this moment of Charlotte and Samantha in the waiting room reading a magazine together.  These two can fight, so I'm happy to see these - not so rare - moments of real sisterhood and friendship with them. 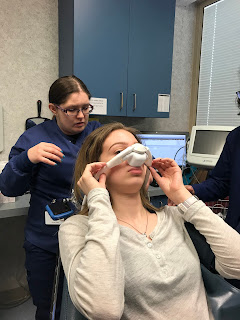 So they gas her up.  And she's out for the count.  She was glad to get this done because they were hurting her, so she's not scared at all 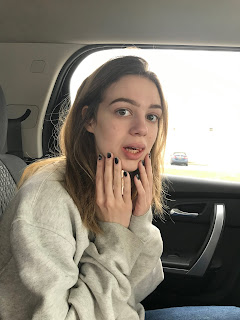 On the way home she was scared she was going to do something dumb, but, instead she was numb.  She kept asking us if her face was still there, cause it's just fuzzy..... 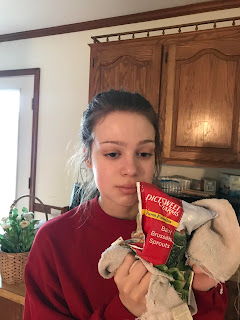 She's a little swollen in this picture, and she was very good about icing her jaw.  She was on liquids for a while, with no straws.  She's an excellent dental patient. 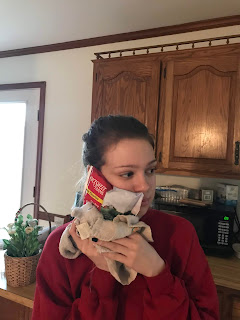 She always did love her vegetables....

One story about this experience that Samantha doesn't remember is that Josephine needed a birthday gift for her friend, so while we were up in the big city, we went to Ulta Beauty supply to get the gift.  Samantha loves Ulta, but, was too stoned to know what was happening.  I found the gift, while Charlotte walked Samantha through the store, asking her not to touch stuff.  Samantha kept saying, I love this place; thank you for bringing me her; can I take this home?

I quickly got what I came for, and while I checked out, I received my Ulta birthday gift - since it was my birthday month.  It was some anti wrinkle cream (little slap in the face, huh, Ulta?).  Charlotte heroically herded Samantha back to the car without incident, and I handed Samantha the bag and told her she could keep my birthday gift.  She was elated.

About two days later, she comes to me with the Ulta bag, cream still inside, and says, Mom, this was in my room.  I have no idea who it belongs to or why I have it.  Poor kid - she had no memory of the trip at all.  I guess that's much better than having to feel the pain of six extractions!

For our birthdays this month, Ma took the "birthday girls" out to lunch.  I did not look like this first picture at lunch.  This is a snapchat filter but I think I could pull this off, huh?  Maybe not.  Below is the picture of Rachel, who turned 21, and Abbey, who turned 44, and me, who turned 52!  Dang.  We had hibachi and walked the mall like teenagers, buying nothing.  Thanks Ma, and Happy Birthday to us. 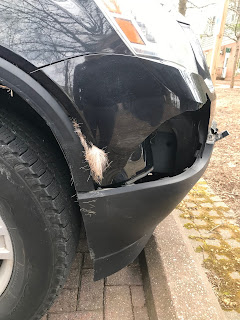 This time it was me.  I hit a deer.  I hit Ruth, to be precise.  Charlotte named her Ruth as we sat on the side of the road and waited for the State Trooper to visit the scene and assign us an incident report number.  Ruth couldn't stand, and as she struggled to make distance between the big black hunk of machinery that had just struck her, she kept falling back into the ditch.  It was truly a sad, pitiful moment.

In my defense, Ruth was standing in the road and I didn't mean to hurt her.  If you have ever hit a deer, dear reader, you know that they just appear out of nowhere and they do not get out of the way.  A deer in headlights is a real thing - once you have a deer in your headlights, you hit it or you swerve - they don't move.

Poor Ruth.  Unfortunately, Ruth is my fifth deer.  Since she's Charlotte's first, the previous four did not get named.  Deer are everywhere here on the Shore - beware. 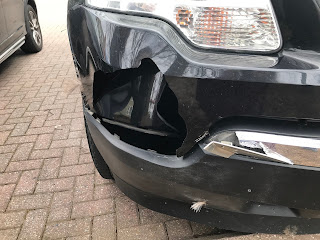 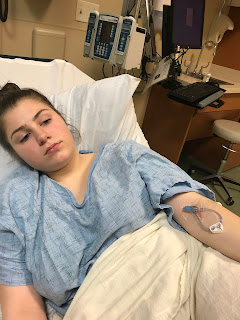 This picture was taken on JMichael's birthday - February 20, 2019.  Charlotte is in our local Chestertown emergency room.  I took her in because she hadn't kept anything down - not even water - for the previous three days.  There were plenty of winter bugs making their way through the classrooms, and even though she didn't have a fever, I figured she was dehydrated and caught a stomach bug. 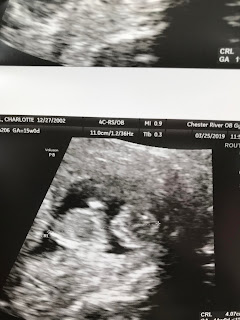 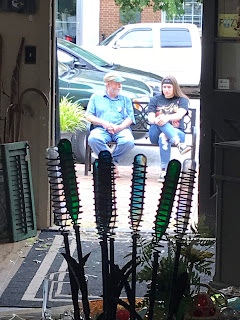 I took this picture of Charlotte at the shop I work in on the weekends - Bee Crafty.  I'm standing at the counter and Charlotte is outside enjoying the spring day and this man sat next to her.  His wife was inside browsing and for the next forty-five minutes, at least, Charlotte and this stranger shared a moment together.  She told me later they talked about everything - the weather, what she wanted to be when she grew up, where he used to live, why they don't have a dog, if make up is necessary in high school.  They talked and talked.

Charlotte swore to me that she did not have any reason to think she was pregnant that day in February.  She knew, of course, that it WAS possible, but, she believed she was bulletproof.  No one is.  The doctor just walked in and said, well, you're not sick; you're pregnant.  Charlotte cried.  I sat.  Spinning.  The doctor then handed her a pamphlet with centers in the area that will perform abortions and told her to hurry - she's already two months along.  Wow.

Charlotte announced to us all - doctor, nurse and me - that she would not be getting an abortion.  She would carry the baby to term and maybe place it for adoption.  Still crying.  Still spinning.

Once we get home from the ER, Charlotte was worried that James would be mad.  What good does being mad do anyone?  James and I agreed - we aren't happy about it, far from it.  But, it is what it is.  Always go forward.

Over the next months, Charlotte still could not keep anything down - her diet consisted of anti nausea meds with ice pops and prenatal vitamins.  She lost eleven pounds in a about two weeks and was hospitalized three times for dehydration.

We pulled her out of tenth grade and put her in a home/hospital program which lets the teacher come to her twice a week.  She didn't attend that much, though, and despite the efforts of counselors and teachers, she will have to repeat the tenth grade.

Her plan is take the GED in January (she turns seventeen in December) and not have to go back to high school at all.  She conceivable could finish her first two years of college before her class even graduates high school.

So, I'm a grandmother.  James is a grandfather.  We are still working out what name we will be called by.  I'm leaning to Grammy and James is leaning to Pops.

Her sisters are supportive and completely turned off to getting pregnant.  Good.  Mom is amazingly supportive - not a harsh word, but, what can you do at this point?  A baby is a blessing.  That's what the nurses and insurance reps tell me when I call to make appointments and such and I say my 16 year old daughter is pregnant.  I'm sure they're right; but, I worry.

Charlotte is a baby.  She's sixteen.  That's old enough, sure, but, she's a baby.  She's nurturing; she's kind; she's opinionated and strong.  She's actually going to be a great mom, I just know it.  I just wish I had had about another ten years of her being my child instead of my grandchild's mother.