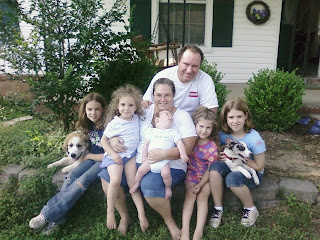 We had our friend take a picture of the whole family on our front porch. The kids are getting so big. This was taken of us "as is" -- no posing, no preparation, no matching anything - just as a "moment in the life of" type thing. Just our family at home. May, 2008

I just started a new, huge undertaking - I am now a representative for Usborne Books. I found Usborne when I was looking for French storybooks for my kids - and I have been a fan ever since. The books (over 1400 titles!) are beautifully illustrated, well-writen, and have tons of great features that are age-appropriate and content driven. They have foreign languages, search and find, texture books, board books, AR books, encyclopedias, how-to books, resource books. Just lots and lots of great stuff for the kids in our lives. Little kids can look for the duck on every page of their storybooks and older readers can use the internet links in their non-fiction books to do more research or take their interest to a more specific point. The books are on tough paper and even the flaps are sturdy enough for tons of lifting and tucking - they even come with a money-back guarantee. Okay, now I do sound like a salesman. Anyway, my website is up in the "Click On These" section to the right and I already busy with four shows on the calendar! Iam ready to do home shows, school book fairs and open houses! I can even to something called an e-show for all of you out there in cyber-space! Yeah!!! Jay had his first doctor's appointment last week and was perfectly glad to be there until the needles hit him. All reports came back perfect and he is healthy and growing strong. At two months old he weighs 13 pounds, 14 ounces and is 25 inches long. 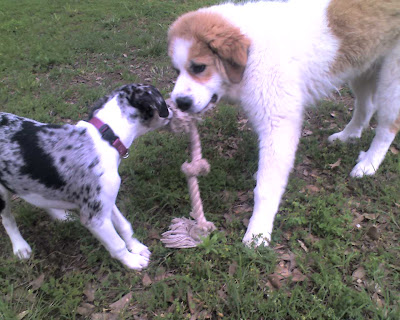 After years of listening to the ladies beg and plead, we gave in. It's time for a family pet. Introducing - drum roll building here -
Codi-dog and Sheila-pup.

Codi is the large one, part border collie and part great pyrenees. He is only four months old and is huge. He is already up to my knee. Since he's a playful kid and full of energy, he was tackling the kids in the backyard and nipping at them. He wasn't drawing blood, but, he did bite holes in our clothes and it hurts when he's nipping at your bare ankles. James intervened before we shipped poor innocent Codi back to his previous owner and said he just needs some training. So, Rae and Sam went to dog obedience school, care of Dad. This helped a little, but, in the end, our solution was to get Codi a playmate. Enter Sheila.

Sheila is the smaller one, a six month old Australian shepherd. She is full of energy, too, and that works for everyone. The two of them tackle each other all over the backyard and are usually found napping together in the mid-afternoon, under the trampoline.

Codi and Sheila are outside dogs, but we have assured the kids that the dogs can hide in the garage if the tornado siren goes off again. Occasionally, we have let them in the house to 'visit' and teach them to sit and lay in the house. This is also their opportunity to guard their youngest charge, Jay, who doesn't get out to the backyard as much as his sisters, yet. I have discovered that letting the dogs in at 6 am is also a good way to get the ladies up for the day... 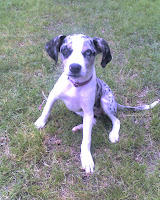 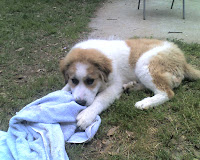 Here you can get a good look at Sheila-pup head on. See her eyes? The right is brown and the left is blue! Codi-dog here, too with his favorite toy - a towel - now full of holes. He loves it when you drape it over his head and he finds his way out. 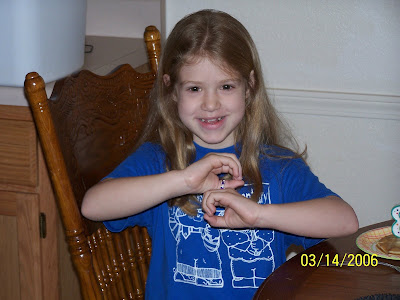 Rachel is now ten, but, this picture was taken on her eighth birthday. As our oldest child, Rachel has the natural ability to take care of her little brothers and sisters. She will be the first to sit and read to her little sisters and help them with their chores. She'll hold their hands while we are out and likes to be charge. She handles all this with a certain air of responsibility and authority. Her sisters and brother look to her for direction. On the flip side, Rachel is the moodiest of all our kids. Once she is in a bad mood - look out. It could be hours before she will be pleasant company. And whatever the problem, she always gets past it. I think she's entitled to her moods, partly becuase I'm also a pisces and I understand wanting to be left alone, but mainly because when she engaged and interested, she is all about business and fun! Rachel Mae was named after James' Mom, Nelda Mae, and is espeically proud of the fact that they share a birthday. Rachel loves to rearrange the furniture, draw and design. She will draw houseplans one minute and animals the next. If it's paper, she's into it. Rachel earned her black belt in Tae Kwon Do and wants to play the piano. She is the most likey note-writer in the house. If I get a "mommy note" found around the house, it was Rachel that wrote it for me. I have received love notes, apology notes and sweet little nothing notes - just her way of expressing her sweet self. Rachel likes to sing and practically filled my phone with voice notes - her and her sisters singing everything from Hannah Montana to I Am A Child Of God. She is nightowl. Don't talk to her before breakfast, all you will get is a grunt. Rachel collects rocks. She wants to grow her hair out and get her ears pierced. Her grades are always Honor Roll, and she works hard at some subjects to keep it that way. Others, especially science, come easily. Rachel is starting to talk on the phone to her friends, and she just began her own blog - the funky tree stump. She said the name just came to her and she liked it. I do, too. Rachel is athletic and kind; she is imaginative and creative. She is quick to make friends and loves pancakes, baked chicken and strawberries. Rachel has earned some nicknames around our house - Rae, cocinelle, peanut butter, RB-girl and most recently, Flipper. Rachel asks lots of questions (the other day while we were driving she asked how I thought my life would be different if I had been born black...) and she studies the answers only to create more questions. Rachel's favortie color is green and she's a picky eater. She is determined, goal-driven, and idealistic. She is one of those kids that can while away an afternoon in a daydream perfectly content. She likes to ride her bike and is thrilled to be changing schools next year to middle school. Rachel wants to be an artist when she grows up. I think she'll be a great artist and I will be right behind her - nagging her to do her work and cheering for her accomplishments. Go Rae - I love you. 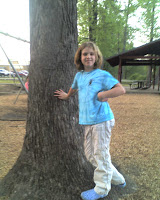 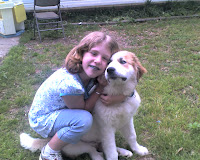 Top Ten Reasons To Have A Mormon President
By David Alvord

10. So that the "National Cathedral" can be renamed the "National Tabernacle".
9. So NASA will comission a satellite to hie to Kolob.
8. The Secret Service will be changed to the Sacred Service.
7. So that all official government prayers will include the phrase: "that we all get home safely".
6. So that Napoleon Dynamite's endorsement does more that get Pedro elected.
5. To have a President who can not only explain things in Layman's terms but also in Lemuel's terms.
4. An exchange of presidential pardons for 100% home teaching.
3. Finally a President who can not only pronounce the word "nuclear", but can also say "mahonri-moriancumr" and "maher-shalal-hash-baz".
2. So that at his inauguration he will place his hand on the Bible "as far as it is translated correctly".
1. AND, to have a first family large enough to occupy all the rooms of the White House."