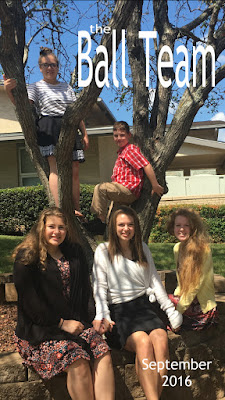 The September splash was taken on a Sunday afternoon at church. Yes, Josephine and JMichael are in the tree.  I'm also not a fan of all the shadows on their faces, but, hey, I'm not complaining.  All five sitting with me in church is worth a less than glorious photo.  Over the years they have each had Sunday mornings when they woke up defiant.  I have left them home rather than fight.  I have also had Sunday mornings when everyone was up, getting ready and happily marching off to meetings.  With seven strong personalities in one family I expect you are bound to get a broad spectrum of opinions.  All five kids know, though, that church is expected and it's important to James and me.  They are their own people and I can only pray I've taught them well.  They are amazing people and I'm proud to call them mine. 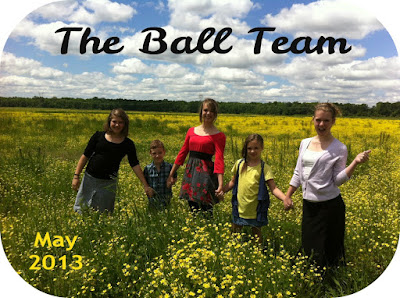 This gem is the splash for May 2013.  This field is close to our house and for a few weeks in late April and early May it turns yellow.  This shot cost Rachel and JMichael a fit of sneezing, but, it's a great treasure to me - golden kids in a field of gold. 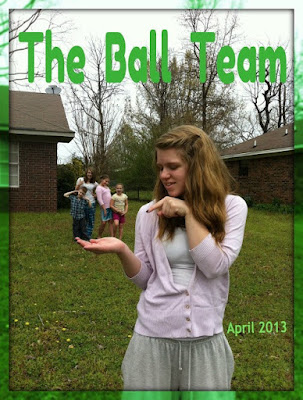 I was looking through old emails today and I found two treasures!  This is the splash from April, 2013.  This photo was one of my first attempts at an optical illusion - April Fools.   It's so great to find these "old" photos.  They, and the kids in them, are truly treasures.

Once upon a time there was a boy named James.  James loved football and he adopted the Minnesota Vikings as his team.  He watched them play on television; he followed their players in the news and kept up with the stats.  James looked forward to football seasons and took pride in his Vikings.

As the football seasons came and went, year after year, James was loyal to his Vikings.  He suffered through their horrible years, lamented the bad ref calls and poor coaches.  He relished their victories and cheered them on - through thick and thin.  They were HIS team.  There were tight losses and huge wins.  There were playoffs and even a few super bowls (the 70s were good to them).  Through it all, James loved his Vikings.

Now a grown man with family of this own and a wife whose team was the New Orleans Saints, James still loved this Minnesota Vikings.  He would be 50 years old this December.  That's 50 years of loving and supporting his Vikings.  That calls for something special.

Enter me, the Saints loving wife.  For James' 50ieth birthday, I wanted to do something big.  I wanted half a century of life to be celebrated in a big way.  Turning 50 is a big deal.  We are not rich, so I was seriously limited, but, I can dream, right?

I thought, what does James want?  What does he love?  What will surprise him?  Yes, as you can already infer from the first part of this story - he NEEDS to see his Vikings.  So I googled their schedule and all around the time of James' birthday (December 5) the Vikings were playing this year in horrible cities - and by horrible I mean COLD.  They played in Chicago, Minnesota and Green Bay.  No one, I bet even Minnesotans like to be at an outdoor football game in Minnesota in December.  So, the season was about to start and I happened to look at the first game of the 2016 -2017 season and it was amazing.  They were playing the Tennessee Titans, in Nashville Tennessee - about a five hour drive.

I quickly enlisted my Mom.  James would get a text notification if I used the debit or credit card and immediately wonder what I was buying at Nissan Stadium in Nashville.  So, Mom was in travel agent mode.  She loved the idea and she called me back in about twenty minutes and told me she got us two tickets to the game, a hotel room for Saturday night (game was Sunday, September 11 at noon) and she was having the tickets UPSed to my office so James had no idea.  She's good, huh?

The tickets arrived; I enlisted James' friend Tim to get him out of the house on Saturday afternoon - he went over to watch a football game, of course.  While he was "busy" I got the kids where to their various friends' houses to stay for the weekend and packed us a bag.  I even talked to the Bishop, and told him James could not conduct on Sunday, nor would he be at Ward Council.  The Bishop, who was also keeping JMichael for the weekend, along with Tim, covered all James' duties and didn't say a word.

To put my plan in motion, on Saturday I called James and said Rachel's car had broken down and he needed to come figure it out.  I showed up at Tim's and James hopped in the car.  I said, there's no smoke or anything, she doesn't know what's wrong with it - it just stopped.  James said fine, let's go, Tim, I'll be back to watch the game after we get her car on the road.  Tim just smiled and said, Sure, let me know if I can help.

Off we went.  James asked a few questions about the car as we headed out of Tim's, but, at the end of his street, we turned to the left - Tasty Freeze was to the right.  James immediately said, where are you going?  I smiled and said, Rachel is fine.  Her car is fine.  She and Samantha both work doubles today at Tasty Freeze and all three little kids are at friends' houses.  You are being kidnapped.

He laughed.  He wondered - for the next three hours where he was going.  I said nothing.  I talked about everything else while he speculated based on where I was driving.  He was asking good questions - telling me how far away cities ahead were located and what we had done there before.  He thought of people we both knew that we might could meet up with in those places.  He had some great ideas I wish I had thought of, but, I had a plan.  Finally, east of Memphis, he relented.  He prayed.  He asked his Father in heaven, where am I going?  He had a clear answer - Nashville.

He thought, he prayed more, what can we do in Nashville?  And finally he got it.  He said NO, Tina.  Really???   The Vikings play the Titans in the home opener this weekend!  Are you taking me where I think you're taking me?  He was thrilled.  I was thrilled.  We had a thrilling time.  And, his boys did not disappoint -Vikings beat the Titans - 28 - 16.  Go Vikes! 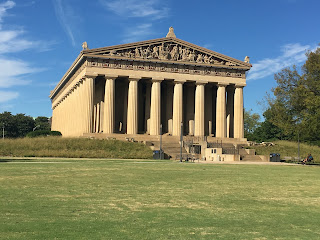 We also did some sight-seeing.  Nashville is a great town.  This is the Parthenon in Centennial Park.  A great park and great morning on a great day. 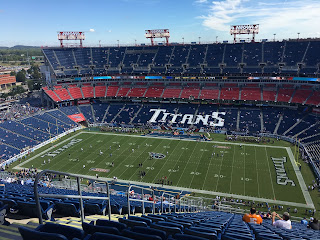 Our view from our seats.  We were up there.  I mean UP there.  The tippy top.  It was a great view and we were in the shade the whole time. 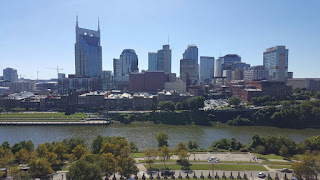 As we turned around in our seats we could see the Nashville skyline, famous for the AT&T, or Batman, building. 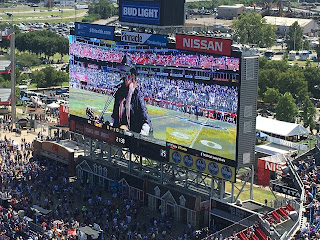 This is the jumbo tron, showing Billy Ray Cyrus who sang a tribute for the fifteenth anniversary of 9-11 and he sang the National Anthem.  Very nice. 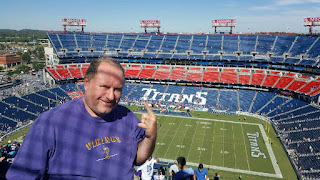 James after the game - representing his team. 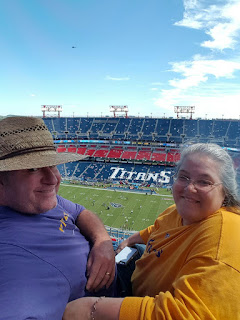 There were a ton of people in purple and gold.  We had this automatic kinship just because we cheered on the same team.  We high fived strangers and we talked football like fans.  Well, James did.  Even in the elevator of our hotel we found new friends in purple and gold shirts.  It was a great weekend and a great day.  James was worried that the Bishop wouldn't approve of his "ditching" his meetings to go to a football game on the Sabbath - I mean, he is the counselor in the Bishopric and had responsibilities, after all.  But the Bishop texted him along the way, and said, no worries.  I support your wife in her kidnapping you.  Relax and enjoy yourself.  We did exactly that.

I need ideas for his 60ieth birthday.  How will I ever top this?