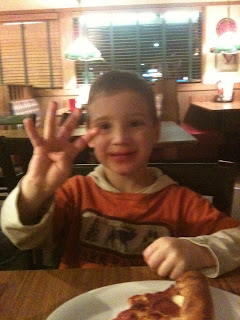 Jay Michael did something amazing last week - he turned four years old. I can't imagine how that happened. Every time my kids have a birthday I wonder at how fast time passes. Just amazing.

Jay Michael wanted pizza for supper, so we went out for pizza. There was a TV not far away that was televising a basketball game, so Jay Michael was thrilled.

We had balloons, and we had cake, orange cake - just what Jay Michael wanted. He got a super snugly soft baseball blanket from Grandad and Grandmom and a new hockey game for Xbox.

At four years old, Jay Michael is an active rough and tumble little man. He loves to play sports of ANY kind. He is all about the pass and the score. He just joined his first team - the under 5 soccer team. He starts next month and he is so excited. Jay Michael likes to talk and tell stories. He has an amazing grasp on the comings and goings of the household. I suppose as the youngest he has been a spectator, but, I'm always surprised at how well he knows the rules, the schedule, the day to day workings of life with the Ball Team.

Jay Michael has a few sayings that are all his. If he says, Momma, I want to be on your team. He means, Momma, I love you. If he says, Momma, I'm gonna knock you on your "boo-tocks". He means, Momma, I'm ready to play. He can work an Xbox better than I can; he can sing Primary songs and he can count to twenty, sort of. He will talk to me on the phone and he knows EXACTLY which of his sisters he should ask to get what he wants. For example, Rachel mothers him, Samantha coddles him, Charlotte plays with him and Josephine defends him. It's sweet to watch. I will say, Jay Michael, you need to get your shoes on. And he will immediately run to find Rachel. If he gets running around too much, and his breathing gets short, he runs to Samantha for his breather. He can work the house crowd to get whatever he needs!

Four years ago, Jay Michael was born and immediately flown by helicopter to the Children's Hospital with wet lungs. He spent two weeks in the NICU, drying out and learning to breathe on his own. He was a fighter then and he is a fighter now. He is strong and brave and exhausting. He's our Prince. Our Jay Michael. We love you!

Do you use Picnik.com? I love this site. Picnik is going away forever. That's sad. In the meantime, though, all the premium features, which have cost money before, are now FREE. I love free. Go here to try it out! 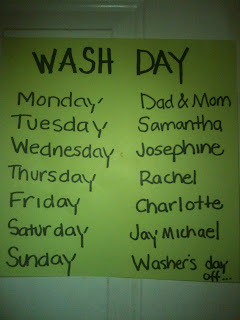 I'm not the most organized person. I like to have an orderly house, but, I just don't see the big picture sometimes. Just this week I was doing laundry. I do laundry every day. Every day. Usually, I just wash it and dry it and leave it in the "clean basket". Once the "clean basket" has become Mt. St. Laundry, we dump it all - about eight loads - on the couch and we all sort it into piles per person and put it all away. This takes a while, everyone dreads it, and it's just a big hassle. This week Rachel said, mid-fold, How about I do my laundry on one day, then Samantha, and so forth? That way we don't have this mountain every week?

And with that, we bought a few extra laundry baskets, set up a chart and instituted a few rules. The rules are: each family member gets one day to wash clothes. On your given day, you must wash and dry and put away all your clothes, towels, sheets, pillowcases and blankets. If, for whatever reason, you do NOT do your wash on your wash day, you have to wait until the following assigned wash day.

So far, it's going well. I went through how to work the washer and dryer with everyone, how to time it so you have your sheets back on your bed by lights out, and the general concepts of laundering your own clothes (stain sticks, overstuffing the washer and cleaning the lint trap. Laundry is complicated!) The ladies seem pretty excited; not because they are doing laundry, but, because they only have to do their own. The size of their individual piles is surprising them. Sometimes they have two loads each, due to school clothes, sports practice clothes, towels, sheets and blankets. It's been a learning experience all around.

I've learned that I took way too long to assign wash days!

April, no, wait, it's February?

It's February. I have to remind myself because the weather outside feels more like late April! 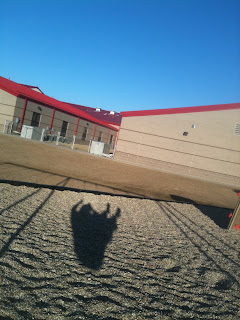 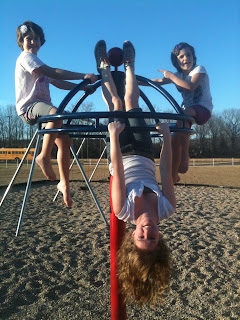 We headed to the park - that's me swinging and Charlotte and Josephine on the twirlie thing with Rachel impersonating a bat! Shorts and tee-shirts in February! Gorgeous weather!