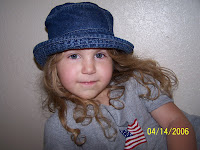 I registered Charlotte for kindergarten today. It struck me as I filled out all the forms that this time it might be different. When Rachel went to school I was heartbroken. She can't possibly be grown up enough to go to school, but, of course she managed just fine. Then one short school year later, I had to pack up Samantha and send her out the door, too. Why did they both abandon me? How dare they grow up so fast! Don't they need me? Now Rachel is finishing the fourth grade, Samantha is finishing the third grade and I am about to send Charlotte to kindergarten. She will also be just fine, like her sisters. But, unlike her older sisters, I will be glad to see her go. Not because I want her out of the house, or because I love her or need her less, but, because I have realized that they do grow up fast and they are ready to build on their foundation and become those wonderful people I have struggled for the first part of their young lives to mold them into. School will help them discover, explore, develop and expand. I hope I gave Charlotte the foundation she needs to suceed - I'm not finished with her yet. That's my job; molding little babies into determined little kindergarteners. Their job is to take off and fly. Kindergarten is looking like a wonderful adventure; she is ready to go. And I am ready to send her. 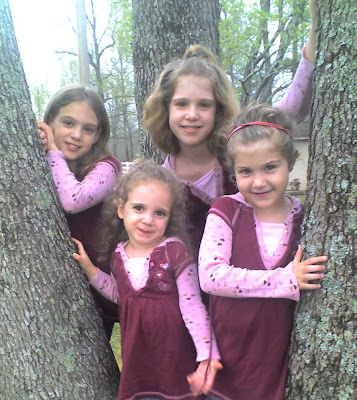 I just love this photo. We were all going to a church activity and the ladies decided to wear their matching shirts. We were early, so we had a chance to pose for some groups shots. This is my favorite photo of the ladies to date, just taken on a whim. And I said I never wanted to complicate my life with a camera phone ...

** james ** the ladies and baby jay ** the smell after a soft a rain ** the ocean ** church, and the better person it makes me want to be ** my mother's meatloaf ** my father's hot rolls ** the quiet of the night house and peeking in on a sleeping child ** e-mails from my brothers ** phone calls from my friends ** 1980 Jeep Grand Wagoneer ** diagramming sentences ** reading, especially biographies ** braiding the ladies' hair ** the color orange ** road trips with the family ** weathermen ** rearranging the furniture ** empty laundry baskets ** Sharpie markers ** the Star-Spangled Banner ** my grandmother's cornbread ** my grandfathers' garden ** Arby's roast beef sandwiches ** civil war history ** my ladies dancing ** being a wife and mom ** our trampoline ** riding with the windows down ** a clean house ** Christmas cards from friends ** the sound of seagulls ** naps ** Put Me In the Zoo by Robert Lopshire ** reggae music ** orchids ** garage sales ** the smell of lilac ** family dinners together ** NFL games ** smiles from a baby ** hearing my ladies laugh together ** the rocking chair on our front porch ** the questions my children ask me ** 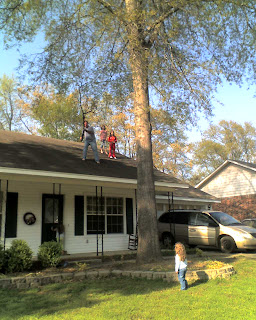 Arkansas is usually a laid-back spot. We don't get too much excitment. And then there's tornado season...

Thursday night (3 Apr 07) we had a close call. The weather was stormy, and looking to turn severe. The line of storms was over western Arkansas and headed our way. As we watched, the placenames that the weatherman was using started to sound familiar. Thunderstorms move quickly, and this front was making abot 40 mph heading northeast. At 10:30pm we woke up the ladies. We told them to get dressed, grab their pillows and go sit in the bathtub. We pulled in the closest mattress and heard an erie sound - the tornado siren. (The town of Cabot tests its sirens every Monday at noon - but when there are rain and thunder for background music, the siren sounds completely different and menacing.) We lost power and the house was black, except for James' phone, which was running the local news website, updating the weather. I was holding Baby Jay and the ladies were all stuffed into the tub, with a mattress over us. James was still out in the living room, gathering a few things we might need if the bathtub were all that remained of our house. He stood for a second at the front room window and felt a great gush of wind, then a great pull of wind, all of which we were mimicked by the blinds, making a lot of racket. That was all he needed and he crouched down next to me on the floor of the bathroom. We were only in there for about five minutes, but, it seemed like an hour. The whole world was quiet and the internet on James' phone told us that the front had moved on. Our first "real" tornado was over.
The next day (Friday) there was no school and we didn't have electricity until Saturday. As we got out and looked around, we fared very well. There were a lot of trees down, as the ground was saturated by plenty of recent rainfall. A few buildings blew over and some families had trees through their roofs. No reports of any injuries or death. Just a mess. We had some limbs to clean up and lots of branches in our yard. The ladies took the chance to get up on the roof and so I had to take some pictures...
We are grateful for our safety and the drills we have practiced for just such a nightmare. And ... while sitting in the tub that night, we decided as a family that we prefer hurricanes. 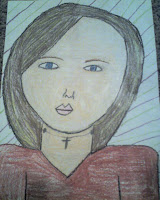 Samantha (8 years old and in the third grade) drew this picture of herself in art class. She explained after the fact that her eyes (currently brown) might change to blue in the future, so she drew them blue. 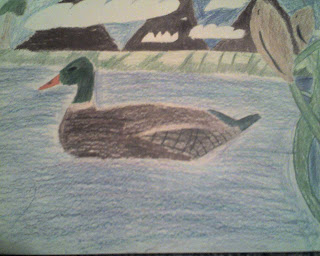 This is a mallard drake that Rachel (9) drew in her art class at school. The assignment was to draw a duck or swan, which was to be entered in a national contest hosted by the Postmaster to create a Duck Stamp. Rachel entered this drawing and her art teacher chose it to represent Westside Elementary School. When she went on to the Arkansas State contest, she wasn't choosen as the winner. We are proud just the same! Great mallard, Rae!
Quack, quack! 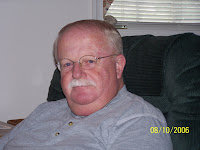 This is my Dad - Wayne Brumbley. This picture was taken in 2006. I want to include him here on our blog in honor of April Fools Day, circa 1987. Let me tell you a story...

In 1987 I was in college and my brother Eric was in high school. My youngest brother David was still in diapers. Since it was April Fools Day, I had already been caught a few times by gags, and it was only about two in the afternoon when I received a call from the Dean of Students. He said I needed to come to his office immediately. I laughed at him and said, sure, this is the Dean, right. As it happens, it really was the Dean and he wanted to see me. So, I showed up in his office, braced for more non-sense, when he offered me the keys to a car and said, "Here, take these keys and go to Lewes, Delaware. Your mother says you know the way. No need to hurry back; I hope everything is okay." Of course, I laughed at him again. He failed to understand my amusement. I said, "Okay, I'll bite; why are you lending me a car and why am I going to Lewes?" He must have thought my mom was able to contact me earlier (this was way before cell phones, mind you, we only had hall phones!) and he was astonished to learn that he was giving me the news - My father had a heart attack and I was to hurry to the hospital to be with my family. Even after hearing the news from a Dean of Students and seeing the serious look on his face, I still laughed, convinced that this was some elaborate April Fool's prank. My friends did not leap out from behind his desk and yell "gotcha". Instead, I took the keys and headed to the hospital, about two and half hours by car.

I was met there by brothers, Eric and David. Mom was in with Dad. (Eric was caught quite off guard at school, too, and didn't believe Mom the first time she told him they were checking him out 'cause Dad was in the hospital.) David was playing happily in the hospital hallways, running around like any curious three year old, peeking in doorways and trying out every button and gadget within his reach.

So yes, my father, with all his dry humor, decided that April Fool's Day would be the appropriate day to pull off a near-death experience. He didn't do any of this intentionally, of course, and he blames it all on the chili he ordered for lunch that day, but, it is a new tradition in our family to call Dad, every April Fool's Day and wish him a happy Heart Attack Anniversary. Eric called this year from his Army Post in Afghanistan!

This year it is 21 years since that awful day. Eric, David and I call Dad on April Fool's Day to celebrate that he is recovered from his trauma and that he is still with us to pull off another April Fool's prank. He had a long stay in the hospital and is still medicated to prevent a future attack. We love you, Dad. Just tone it down a bit next time, huh?