Josephine (7) was wearing a "pretty" around her wrist.  A "pretty" is an elastic hair thing, like you use for a ponytail.  We call them pretties.  So, Josephine was wearing a pretty on her wrist and she was talking with Charlotte (9): 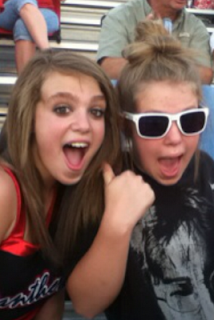 September 2012
Samantha, 13 and Rachel, 14
Rachel loves a goofy pose in a picture.  Samantha doesn't leave the house without making sure her hair is perfection.  Rachel wears John Lennon t-shirts and Samantha is on the school dance team.  Rachel loves English and history.  Samantha loves math and science.  Rachel smolders and pouts.  Samantha explodes and recovers.  Rachel loves to bake and cook.  Samantha would eat nothing but fruit if we let her.  Rachel is usually up the first time I wake her.  Samantha needs multiple rousings and a heavy lead time.  If they didn't live in the same house they might never have met.  Two sisters, diametric opposites.  Don't come between them.  They are there for each other.  Bonded for the eternities.  We love them both.

I haven't done a cute kid quote in a while.  I wish I were better at recording all their cute sayings.  I'm sure it will be manna to my tired soul in my twilight years....

Jay Michael watched as Josephine rolled over a rope.  That's a no-no.  Jay Michael said to me, Momma, Josephine is in trouble.  The referee is going to talk to her.

I was lost.  What referee?  Jay Michael said, Her, Momma.  The girl in the tall chair.  She's the referee.  Cute.  Cute kid. 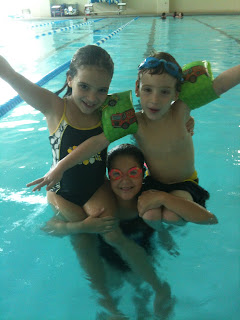 All tongues hangin' out

Do ya'll take pictures of your pets?  I don't usually.  Now I know why - it's hard!  Our dogs are not well trained.  They don't take direction well.  These are the best shots from my attempts. 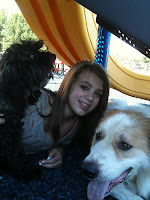 This first picture is Samantha (she and James love the dogs the most in our family.  I am at the bottom of that list....) and our Catahoula, Sheila.  Her eyes are pretty cool and she leaps through the backyard like a deer.  So pretty.  The second picture is of our Cockapoo, Luna.  She was Samantha's birthday gift two years ago and is our only inside dog.  The big guy is our Great Pyrenes, Cody.  He was our first dog, and as a pup he would "mouth" the kids.  It didn't hurt, but, it bothered the kids because they were always worried about being bitten.  James' suggestion at the time was to get another dog.  I though that was crazy, because if the first one was not behaving, why would we get another?  But, as it turns out usually, James was right.  We got Sheila and Cody used her as a chew toy instead of the kids.  Brilliant.
All three dogs came from homes that needed to get rid of them.  They were all free and I hope we have given them a good home.  They are great backyard toys and I know from their dispositions that they love our kiddos - especially Samantha and Charlotte. 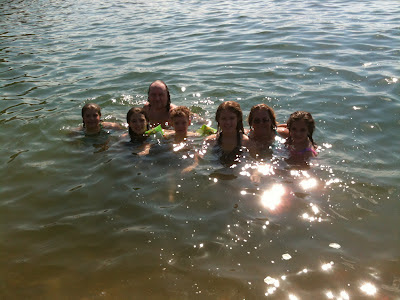 For Labor Day this year we hit the open road.  About 45 minutes north is a lake.  It's quite the attraction around here.  Since I was raised at the oceanfront, lakes just don't do much for me.  But, Greer's Ferry Lake is a bunch of fun.  The water is clear and cool.  There are small sandy beaches and lots of rocky shores.  Lots of families go there for boating and tubing.  Since James is in considerably less pain when he's in the water, we tried to hang out in the pools and lakes as much as we can.  We just played and had a great day out soaking up the last of summer's rays. 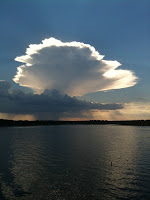 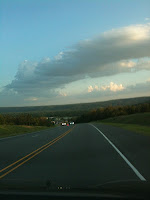 We had beautiful weather!  And a great ride through the Arkansas countryside.


Charlotte jumps off of a cliff.  Yes.  Great parenting, I know.  The cliff is about thirty feet and Charlotte is nine.
Rachel also jumps off of a 30 foot cliff.  Rachel actually went first and demonstrated that you would not, actually die from the jump.  That's the good news.  The bad news is that just before impact, Rachel stuck her feet out in front of her and hit the water bum first.  She was red instantly - like a bad sunburn.  Even days later she is bruised and sore.  She's carrying a pillow around school.  But, at least she has a badge - she jumped off of a 30 foot cliff.
We also partook in another local custom - rock riding.  The lake is very deep and it drops off quickly.  Rock riding is the sport of finding a large rock, diving straight down to the bottom, and letting go of the rock when you hit bottom - as Charlotte puts it, you know you are at the bottom cause it's cold and dark.  The rock makes you sink quickly.  Rock riding - the next olympic sport!  In this clip, Charlotte and Samantha are demonstrating.

Pre-school?? Can it really be time already? 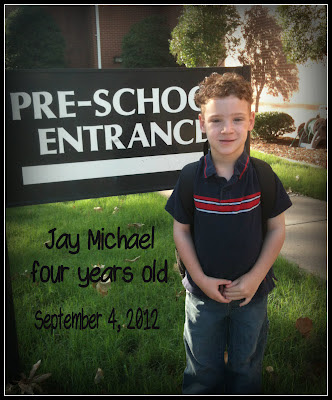 Jay Michael started on the road to higher education today - he began preschool.  He is in a program at the local Baptist church that meets three times a week, only in the mornings.  He has ten kids in his class.  When he came home today, he said that he likes school and his best part of his day was the playground.  I am sad to see him grow up and I am thrilled to see him grow up.  There were no tears today, at least from Jay Michael; he had only a sweet wave and a Bye, Mama, when I left the classroom.  He will do well.  He's ready for some structure and he is excited for his new adventure.  Dag, he's cute, huh?