Maybe I'm a weird Mom, but every now and then I believe I'm doing something right.  Yesterday we went out for our monthly photo shoot (by the by, if you are new here, I change the splash photo of this blog every month and I keep the pictures as a journal of the growth of these precious people I am happy to call my children).  I used one, but, I just wanted to share how much fun these times are.  Rachel even said to me (and this really threw me) Mom, when I get married will my husband be in the splash pictures?  Whoa.  First, who is getting married?  And second, Awwww, you think this is a continually good idea and want it to include your future family.  Wow. 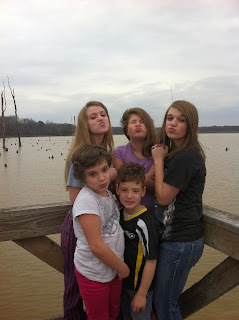 Duck faces, even though all the smart ducks flew south months ago. 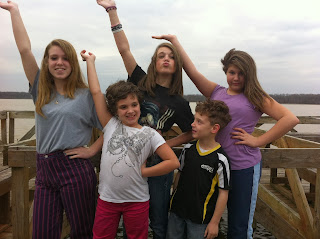 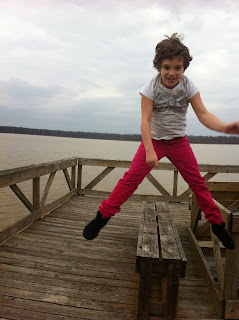 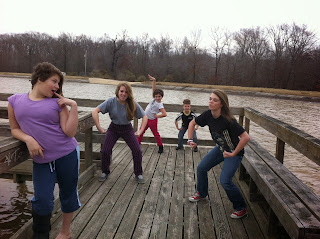 You choose the pose.  What a gang of personalities. 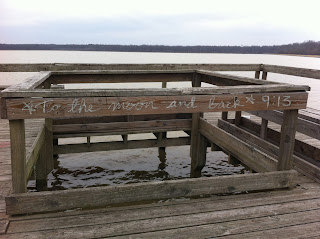 Sweet grafitti on the dock.  Anyone know what 9:13 is?

I was out with the big ladies recently at WalMart.  We stopped for a bathroom break.  Rachel came out of the bathroom stall first and immediately upon seeing the short sink, she drops to her knees and washes her hands.  As soon as she leaves to dry off, Samantha walks out of the stall and looks at the short sink.  What does she do, too?  Yup.  What a bunch of GoofBalls.  They make my life so fun.

Wow.  Times really does fly.  This curly headed tot in North Carolina is now ELEVEN.  Charlotte is in the fifth grade; she is the tallest of her sisters (who are currently in the 10th and 9th grades...).  Charlotte loves to sing and swim.  She is full of ideas, full of life and never shy.  Charlotte has recently discovered the stage, and I think this will stick.  She's not afraid of anything. 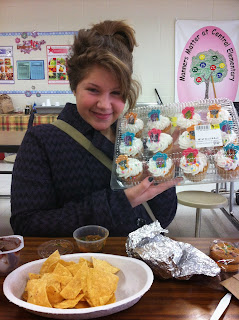 While the kids are out on break from school, the school still serves lunch - through donations from local businesses.  We go down there and eat, cause it's fun, it's free and we live only a block away....  Yesterday, we mentioned that Charlotte was having a birthday, and today, when we arrived, the ladies sang to her and presented her with cupcakes.  I love living in a small town.  So Charlotte had Chipotle and cupcakes for her birthday. Happy Birthday, Charlie.  We love you. 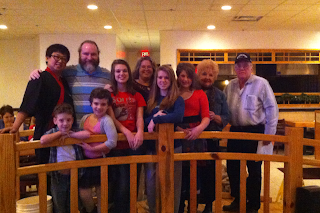 One of the kids' favorite Christmas traditions is Japanese food with James' Dad and Jean.  We do this every year and it's so much fun to have them cook right in front of you.  This year we snapped this picture of our whole group - plus the friendly waiter, to James' right. 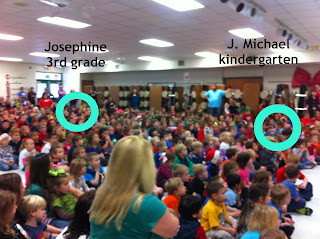 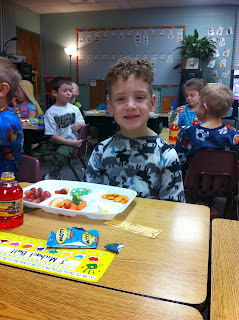 The little two celebrated Christmas at school with a school wide sing-along.  That picture is the student body of their elementary school.  They sang and the teacher did reindeer games and it was sweet and fun.  J. Michael was in his jammers, because his class was riding on the Polar Express that afternoon.  Josephine's class made a present for their parents and decorated "gingerbread" houses.  Christmas at school is fun. 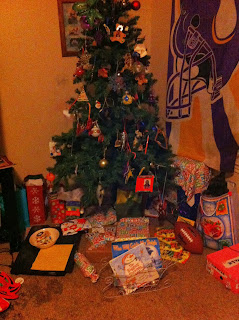 Back at home, we were ready for the holiday.  Why didn't I turn on the Christmas lights before I took this picture?  Ugh.  You can see our sleigh of Christmas books in the front and cookies and a letter to Kris Kringle.  No carrots this year, sorry reindeer. 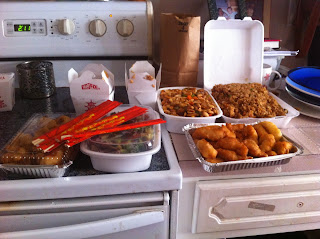 We had a great Christmas.  Everyone enjoyed their surprises - I took no pictures.  I did get a picture of my annual gift - Chinese food for dinner.  We had goodies delivered from friends, carolers stopping by to sing and lots of time to hang out together and relax.  Merry Christmas everyone. 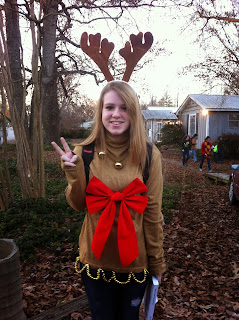 And Rachel.  She had an ugly Christmas sweater party for her forensics class.  But did she wear this sweater and matching headpiece just for fifth period?  No.  What fun is that?  She wore this jingle bell sweater all day.  All day.  I took this picture as she got in the car after early morning seminary.  But never fear - she won the contest.  She was also the only one to wear an ugly Christmas sweater.  Way to go, Rae.  Jingle all the way.... 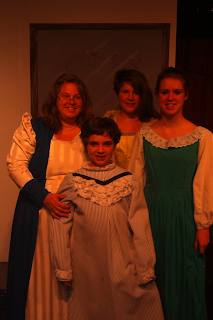 Last weekend Charlotte, Josephine, Rachel and I appeared in A Christmas Carol.  I enjoyed myself, met some new friends and loved seeing the ladies shine.  Charlotte is in the back in this picture - she played Fan, Ebenezer's little sister who comes to see him and bring him home from school.  Her scene was in the Christmas Past portion of the play.  She did a great job - she only had three lines, but, one of them was a paragraph long and she nailed it.  Charlotte also played the part of a dancer at the Fezziwig party in Christmas Past.

Josephine, in the front, played a caroler.  She stood, center stage, and sang We Wish You A Merry Christmas until Scrooge stands and yells at her, calls her an imbecile and she shrinks away sadly.  The audience was always sympathetic to this pretty little girl being berated by the play's bully.  Later in the play Josephine also appears as Belle's (Scrooge's ex-fiance) daughter. She was unintimidated with her solo.  She also nailed it.


Rachel, in green here, had three roles.  Her main role was Belinda Crachit.  She has a bunch of lines in three different scenes (Christmas Past and Christmas Future), as she comforts her mother, supports her brother Tiny Tim, plays with her Crachit siblings and prepares the Christmas Pudding.  Rachel also appeared as a dancer at Fezziwig's party, and she played the role of Belle's friend, who meets Belle in the street in Christmas Past and they talk about Scrooge and how he is all alone in the world.

I played the role of Mrs. Dilber.  She is the laundress who picks over Ebenezer's dead body in Christmas Future and then sells his personal effects to make a little fast cash.  I wore rags and had dirt on my face.  It was fun.  The dress I'm wearing above is my other part - a party guest at Fred's party, in Christmas Present.  I didn't dance.  Whew. 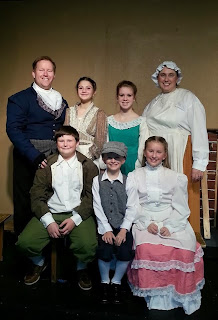 I'm not itching to do another play.  All three ladies say they want to do the next one - CSI: Fairy Tales.  I'm glad they have found a great outlet and they enjoy the stage.  I say they can have it.  I love to watch.

Sorry the picture above of our family is so dark.  We only had candlelight in 1847, you know.  The picture to the right is Rachel (in green), with her Crachit family.  Mr. and Mrs. Crachit are actually Sgt. and Mrs. Shumway.  Becka, the blonde seated in front of her mom, and Alex, in the hat, are also Shumways.  The other siblings were loaners.  So sweet.  Aren't they a cute 19th century English family? 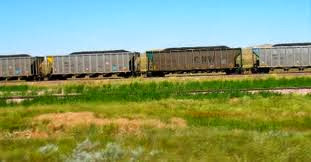 We have lots of trains running through our rural Arkansas town.  We are frequently stopped by a train.  We were stopped by a long northbound coal train earlier this week and Charlotte had an observation.    "Look Mom, that's a long train.  All those people north of here have been really naughty this year."  (Cute Kid Charlotte, age 10) 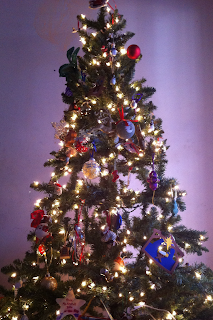 We finally put up our tree.  Each year I wait until after James' birthday (December 5), but, the truth of the matter is that this year we didn't have a tree.  We had been given a white tree after the hurricane (now 8 years ago) and it was used when it came to us.  Last year was its last.  This year we have a new tree - 6 feet, prelit, and snaps together.  Easy to assemble.  The ladies and JMichael decorated it in no time and we now love to play a new game - we call it "speak for the ornament."  At night we get in jammers, brush teeth, put homework away, pick out clothes for tomorrow and assemble by the tree.  We read a Christmas story - not pictured, but all our Christmas books are in a "sleigh" under the tree - and then we take turns picking an ornament.  Each ornament has a story - where did it come from?  who does it represent?  who is that cute baby?  who made this ornament?  We talk about the ornament and then it's time for prayers and bed.  We are learning a lot, remembering a lot and enjoying our Christmas holiday.  We hope you are too. 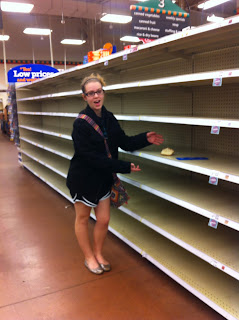 This is what the bread section of Kroger looks like the night before Arkansas is supposed to get an ice storm.  That one piece of stale, forgotten bread is all that remained.  Wow.  School was cancelled for two days - Friday and Monday.  We had a full weekend planned with a state championship football game, the opening of A Christmas Carol and it was all put on hold for ice.  Instead we enjoyed putting up our tree, sleeping late and playing with friends.  No sandwiches, but plenty of down time. 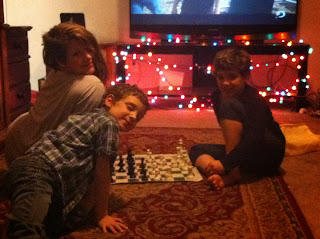 This is the only picture I took this year for Thanksgiving.  We had a very quiet holiday, with a twist - we went to a local church for Thanksgiving dinner.  We went to the Church of Christ, which offered a free dinner to anyone who showed up and you could take to-go trays, too.  So we all ate the usual homemade fare of turkey, ham, stuffing, mashed potatoes, sweet potatoes, corn fritters and green beans.  We took it all home to James, too.  The only thing missing was the pie.  I do love pie....

We also had the annual Thanksgiving chess tournament, this year Rachel was the winner.  Next year I hope JMichael will participate.  The kids had a week off of school, so I had a week off of substituting.  We did almost nothing; lots of sleeping late, playing with friends and laundry.  One afternoon I literally sat on the couch for HOURS - there was a Hitchcock marathon.  The kids and I watched Rear Window, Psycho and the Birds.  Well, the kids came in and out; I was glued.  It was like a brief summertime in November.  The weather cooperated, too.  Days in the 60s, no rain.  Awesome.

I am thankful for these people in my family.  I love Rachel's imagination and optimism.  I love Samantha's independence and serious nature.  I love Charlotte's confidence and sweetness.  I love Josephine's curiosity and persistence.  I love JMichael's boundless energy and innocence.  And James?  I just love him.  I love his faith in me and his ability to dream in face of what seems like an insurmountable obstacle.  They are each so different and I can't imagine life without them.  I am also thankful for the family that brought me here - Dad and Ma, Eric and David.  You all are also so different, yet crucial to who I am today.  Thank you.