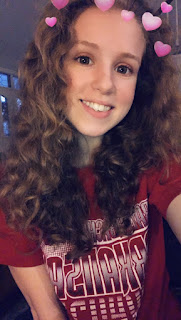 Rachel headed back to Arkansas after leaving us in June at David and Dawn's house.  She took Samantha with her and Samantha was able to visit her friends and work at Tasty Freez again.  She stayed with Rachel about three weeks.  Rachel drove back here to Maryland in mid July, to bring Samantha home and she stayed a few short days - visiting her friends here and resting up for her return drive to Arkansas.  While she was here, we all went down to Eric and Abbey's house to hang out with them, too.  Abbey talked to Rachel about a possible job, and, if everything goes well, Rachel may be moving to Maryland on her own in a few weeks.  Ah, the life of the young and single!

Rachel has always been her own person - ready to leap, to try and to explore.  She wants to get her education and pay her bills - all while hiking trails and meeting new people.  She's a dreamer, with a conscience.  She's a planner - with big ideas.   For my part, I would love to see her move to Maryland and finish her degree here.  But again, this is Rachel.  She will do it her way - I just try to make the path easier. 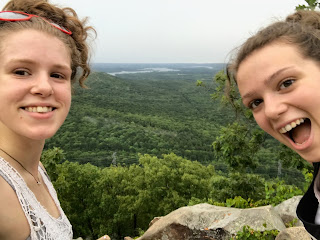 Rachel and Samantha, from the top of Mt. Pinnacle, Arkansas.  July, 2018 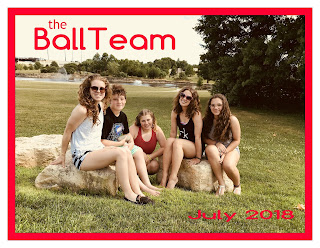 Our splash for July was taken in Kansas, while visiting David and Dawn.  All five are together for this trip, so we have another group shot this time.  It struck me recently that the fact that Rachel lives in Arkansas and we live in Maryland is not the only reason that I can't always have all five in a splash picture.  In about a year, Samantha will be finished with her second year of college and will have to transfer away to a university to finish her Bachelor's.  The year after that, Charlotte will graduate high school and she could join the peace corps or head to college on a swim scholarship, who knows?  Two years after Charlotte, Josephine graduates, and will surely leave us for college.  By then, her sisters may be married and living wherever.  It's all going to happen in an instant.  But, today, right here, they are all together and that's a lot. 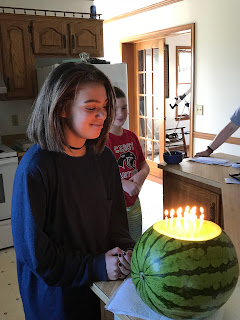 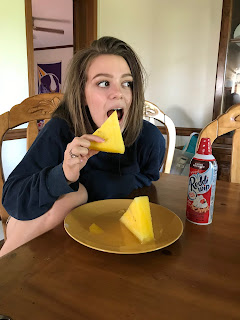 It's still  happening.  Samantha had another birthday, even though she will tell you she doesn't want to get any older.  Recently she had to contact her bank because she needed to know about a deposit she had made while she was in Arkansas.  She was asking me if she was calling the right place and asking the right questions.  I told her she was handling it all just right.  Her response?  Ugh, mom.  I don't like this adulting thing.  Growing older is no fun.  I'm not doing it.

Instead, she is growing into an ever more responsible adult.  She handles her own financial aid forms and registrations for college.  She worked at tasty Freez while she was visiting Arkansas this summer and she is job hunting now that she's back in Maryland.  She is quite capable of this adulting thing, whether she wants to do it or not.

Samantha is single, and after her breakup with long time love Jonboy, she is having trouble finding a friend.  She doesn't want a boyfriend, she says.  She just wants friends, and boys just want girlfriends.  Samantha is attending Chesapeake College and finishing her general education requirements while deciding what she wants to be if she ever grows up.  At this point she's an accounting major, but, that is subject to change.

This year her watermelon/birthday cake was a seedless yellow melon - fruit as always, and with a twist for our nineteen year old.  We watched "NI'm Inteen" on the Frog Prince - a nineteenth birthday tradition my mom started when I turned Nineteen.  And we played Dice - more family game night.  A birthday settled in at home, with netflix, games and fruit - yup, that's our Samantha Marie.

Charlotte is an active young lady.  She likes her netflix, don't get me wrong, but, if there's something going on, you can bet she will want to be in the midst of it.  Since school is about six weeks away, she is getting ready for volleyball season.  The team seniors sponsor unofficial 'practices', which are really just work out sessions, to prepare for the season.  These work outs are from 7 am to 9 am and they run the bleachers, stretch, sprint and work the free weights.  I can tell you that they are working hard.  Charlotte is sore, and then, this happens. 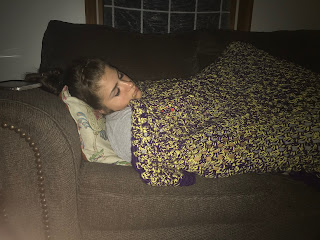 Charlotte, seven thirty on a Thursday night - I'll watch Jeopardy with you, Momma.  And then, before we even find the first Daily Double, ZZZZZZZZZ.  Yeah for volleyball season. 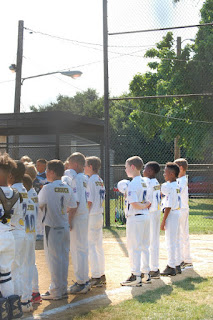 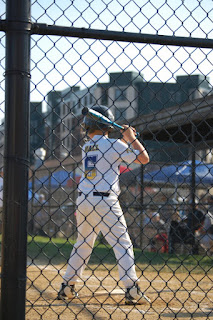 The 2018 Maryland State Little League Tournament was held in Baltimore, at the South Baltimore Little League fields, right up the street from Ft. McHenry.  Kent County was there representing District Six - which comprises Kent, Queen Anne's Caroline, Talbot and Dorchester Counties.  There were eight teams there and the tournament was double elimination, round robin. 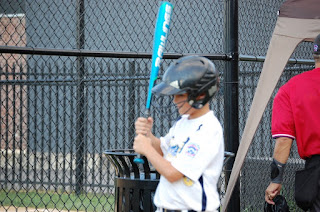 Our first game was against the team from Hagerstown - they called themselves Big C.  We lost.  We lost big.  This was the very first defeat JMichael ever had on the baseball diamond.  They had to invoke the slaughter rule - it was 21 to nothing.  The boys rallied to win their next game, and then, lost their third game, ending their tournament for this year.

Wow.  What a season.  Twleve undefeated regular season games for the Galena Lions.  Four undefeated games for the District Six tournament as the Kent County All Stars.  Then one win, two losses in the Maryland State Tournament.  Great season! 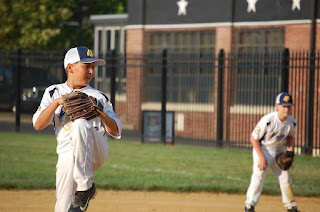 JMichael consistently played first base.  This picture was taken by Noah's mom, since he is pitching, but, there's JMichael - ready and eye on the batter - the play may go to first.  He really enjoyed his teammates, his position and everything about baseball.  He loves being out in the yard and throwing the ball with his Dad.  We are already training for next season. 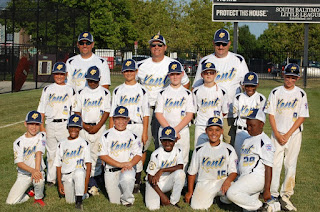 The 2018 District Six Maryland Championship team.  JMichael is standing, dead center.  Coach Chris said that he made a name for himself as a first baseman to watch.  He will keep playing soccer now that baseball is over, but, he's hooked now on baseball, too, so we will be back in the spring.

Baseball, so far, has been quite a ride.  Loyal readers may notice that JMichael is now wearing a different uniform - he was selected for the Kent County All Star Team.  As an All Star, he represents the whole of Kent County.  About seven of the Galena Lions are also now all-stars, so JMichael is in good company.  He is the all-star first base man. 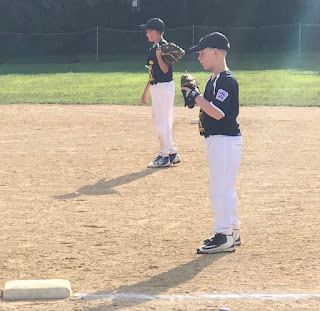 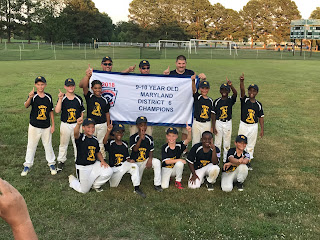 One double elimination round robin tournament later, the Kent County All Stars are the District 6 Champions!  Maryland is divided into 8 Districts and District 6 is comprised of Kent, Queen Anne's, Caroline, Talbot and Dorchester Counties.  Winning that tournament was great, but, even greater than that?  The team is STILL undefeated.  Crazy.  JMichael is pictured here, second from the left, standing. 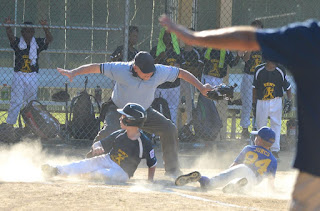 He is pictured here in the Kent County News.  Front page of the sports section, too. 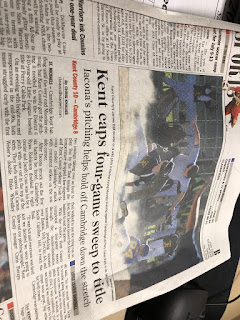 JMichael said, Mom, our story went on the front page, and the World Cup was on the third page!  He was pretty impressed by the fact that his team's win was considered more newsworthy that the World Cup, but, one day we will talk about this and he will realize that soccer just doesn't hold water with everyone as much as it does with him.  For now, though, we will give him his victory.


Baseball is continuing now, with the Maryland State Tournament - which will be in Baltimore.  If the boys can win the State, we move on to a tournament in Rhode Island.  So far Kent County has been very generous and proud of the boys - the County has bought all the uniforms and gives the team manager a budget for trophies and water for the games.  If we have to travel to Rhode Island, let's hope the State can help out with travel vouchers.  Go get 'em boys! 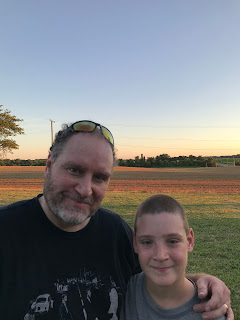 James is loving this adventure with JMichael and his team.  He's reliving his younger days as a boy of summer, plus, he's getting to help out with coaching.  Don't they look happy?  On to State!!!

Our dear Arkansas friends, the Hazeslips, were visiting the east because Sydney was traveling with the marching band to perform in the Independence Day parade in DC.  We took the opportunity to get together for some fun, with the Krenzes, also friends from Arkansas, but, now living in the VA suburbs of DC. 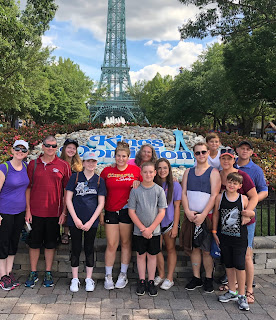 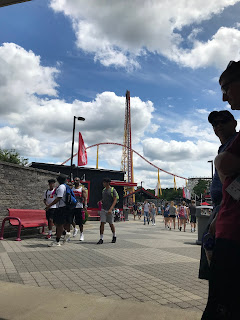 This is the Intimidator.  Five stories high - almost a vertical drop.  Josephine said she started to black out.  Megan said her hair was in a ponytail when she got on the ride, and loose when she got off.  Charlotte said she felt like she left her body.  I like roller coasters, but, I did not dare try this one. 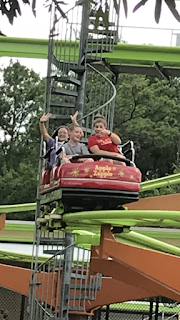 This is more my speed of roller coaster.  Everyone loved this one with its quick twists and turns.  My favorite part of the day was just walking around and catching up with everyone.   We were there when it opened and closed the place down.  It was so good to relax with friends.