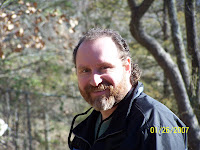 Wow - James and I were married on Good Friday in 1997 - March 28th. Eleven short years ago! I wish I had a picture on here on our wedding day - we were each about 50 pounds lighter - but, I can honestly say I remember that day like it was yesterday. He's a very playful father - always wrestling with the ladies and playing video games with them - spending time with them as a group and as individuals. He's a wonderful husband, too, always giving me the freedom to do what I think is best and letting me be the mom and wife I want to be. We are truly partners. I love him and our family. We are very blessed. Plus, he's a handsome devil, too, isn't he?! 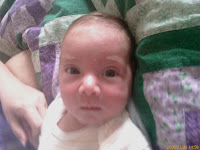 Look at me now! 25 March 2008
What a blessing. Jay is a healthy, hearty little boy now, taking on the new challenges of living with four sisters who want to be holding him all the time. I literally have to hide him in the house somewhere while he sleeps, otherwise Charlotte (5) will pick him up and hold him, or set toys all around him. She'll be a great Mom one day!

James Michael Ball, II is a wonderful baby. After a two week stay in the NICU of Arkansas Children's Hospital, he is in great shape and handling his sisters very well. He was born as what the nurses there called "whimpy white boy", meaning that his lungs were wet and he was in respiratory distress. Apparently this condition is most commonly found in caucasian males! Even though he had a birth weight of 8 pounds, 14 ounces, he was on a ventilator for oxygen and had plenty of probes in him keeping track of his heartbeat, repiratory rate and his oxygen saturation level in his blood. At Children's he was in great hands. The nurses and staff were wonderful to be around and I know he received excellent care. He was under a heat lamp constantly and didn't even wear clothes for the first week of his life! You can see in this phot, too, that he had "baby cuffs" on his hands because he keept trying to pull out his tubes and probes. He was strong, he just wasn't breathing well.

Okay, I'm not really very comfortable with all this technology, but, I'm going to try to tackle this "blog" thing. Here goes ...