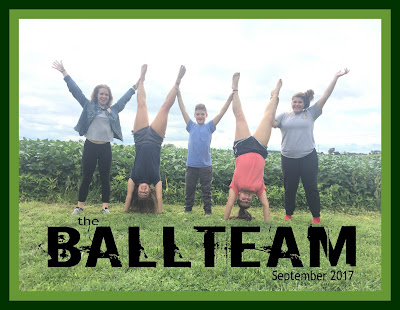 September's splash was just the BallTeam and the beanfield next door.  I've been wanting to pose them differently.  I get to see their faces everyday, and in this pose it's kinda hard to see Samantha and Josephine, but, they volunteered when I suggested the hands to feet idea.  Each of them has such a different personality and each of them fit so well with each other.  Contrary to what I've occasionally been told by strangers at WalMart, we really do need five kids.  All of them and each of them makes us a BallTeam. 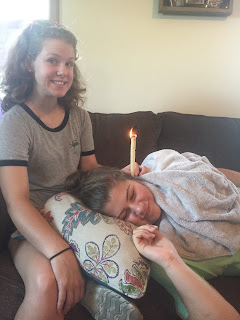 Here at the Ball Team house, we have a secret talent - ear wax production.  We excel at it.  The gift comes naturally.  It is, however, annoying.  Rachel is demonstrating a common occurrence at our house - candelling your ears.  The principle behind it is simple - the flame on the "candle" (actually a hollow tube) creates a vacuum behind it and the heat of the flame softens the wax.  Once softened, the wax is sucked up into the vacuum now existing in the tube.  Rachel burned this candle all the way down, without singeing Charlie's hair, and it was full of wax.  Her ears are open and she has no more excuse not to hear her morning alarms. 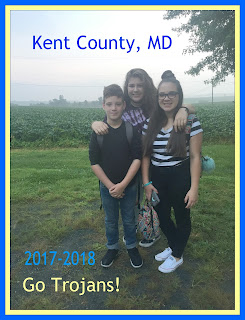 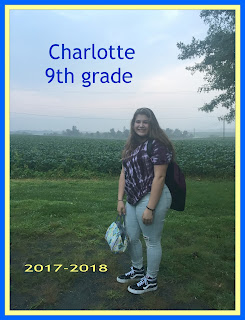 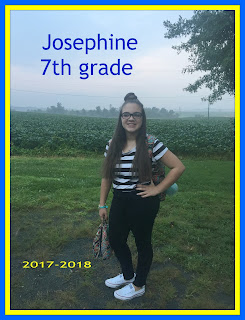 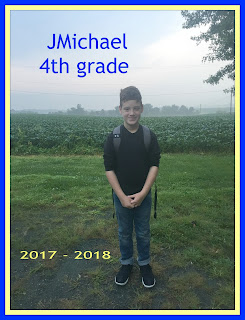 This year we are in Maryland and we no longer have our traditional brick wall backdrop.  Only three are in school still, but, Rachel and Samantha are starting college here in Maryland.  I had to actually lighten these photos because we have to leave for school at seven in the morning!  Three kids in three schools, AND, in three different little towns, makes for an early morning.  Charlie and Joey have to be in class by seven thirty, but, JMichael catches a bus at the end of our driveway at eight thirty.  One crazy thing about Maryland schools - the kids now have lockers.  All three of the schools have lockers, even the elementary schools.  Another crazy thing about Maryland schools - very high tech.  Josephine was issued an iPad, which she keeps for the whole year.  All sixth and seventh graders get one.  The students even keep them over the summer!  Charlotte has a MacBook Air.  A sweet little laptop that she keeps until she graduates!  Whoa.  Homework is on Google Classroom and the ladies say they use them in every class, even PE.

Charlotte is playing on the school's volleyball team and wants to play basketball in the winter and lacrosse in the spring.  She's a second soprano in the choir, which is super small, 8 girls.  No guys.  So every voice counts.  They will perform in the area and are already working on Christmas music.  Josephine applied and was accepted into the STEM Academy - about twenty-five students from each grade get in.  It's an advanced Science, Technology Engineering and Mathematics curriculum.  She goes to the same class schedule as every other seventh grader, but, her math, science and technology classes are advanced and fast paced.  She will get to go on special field trips to the river and bay, plus "walking trips" to the college for experiments in their labs.  She's very excited and loves school so far.  JMichael?  Well, he's loving his new school, says his teacher is really nice and in the first two weeks of school he has two field trips.  Two, already?  These kids may live it he country, but, the schools use the proximity to the cities to their advantage.  Ahhh, Maryland.  Come see us!