I know I just got home from a week away - wonderful - and I will blog about that later, but, on my mind today is this - How do I teach my children to not waste? I mean, really, half eaten apples, half a box of dog treats gone in one day, full bowls of milk leftover in a half eaten bowl of cereal...I could go on, but, I won't, because it's already making me crazy. Any help out there? Aaaahhhhhh!

On a side note, can I just say that I already nag my kids. That's not working. And they do have other wonderful qualities. Thrift is just not one of them....

and thank you, Becca, for the video!

Samantha has taken up a new hobby. String tricks. I remember doing a few of these as a kid, but, had forgotten how. Samantha, though, in her fourth grade classroom, took it to a whole new level. It seems one day for class, the teacher handed out string and let them play with making shapes. (I have bigger hopes for her in middle school...don't get me started.)
Photography by Rachel.... 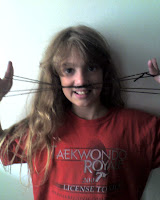 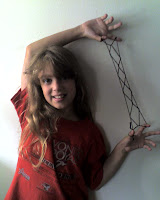 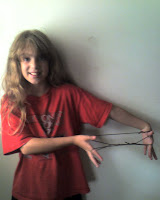 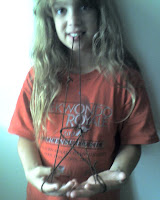 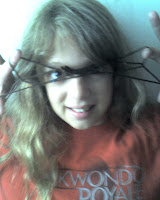 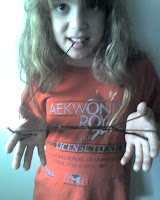 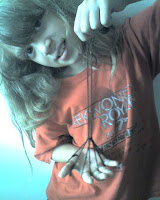 I am originally from the east coast - Maryland's Eastern Shore. There, we have hurricanes. Sometimes we just have a big storm, lots of wind and rain; sometimes we have more damages and are left without power for a week or two. In any event, you can see the storm forming, so you can prepare. After I was married, my family still lived in the east - in Maryland, Virginia, and North Carolina, and we still lived in preparation for the storm which would come in every hurricane season. Later we migrated to the Gulf Coast of Mississippi, also prime hurricane country. There, my family experienced the tragedy of Hurricane Katrina. We found out then that we were not as prepared as we could have been, but, that was a monster storm and the fodder for many other posts. Not this one.

Katrina blew us north, to Arkansas. This is Tornado Alley. Tornadoes are so vastly different from hurricanes that there really is no comparison. Having lived in both areas of the country, and having had children, whose lives are my responsibility and primary care in this world, in both storm areas, I feel qualified to say emphatically - I Prefer Hurricanes!

Today, I had a hair appointment. This was a big day for me, because the last time I had a haircut was 14 months ago, and I was ready for a change. So, I took the little ladies and Jay to my friend Chelsie's house, and the two big ladies stayed home and had a list of chores to accomplish before I got back. No problem right?

While I was in the chair, foils in my hair and chatting away with my new friend, the stylist, the sky darkened. The radio warned of a thunderstorm watch and we kept a close eye on the sky. The clouds swirled, the rain fell in torrents and the hail pelted our windows. Meanwhile, my friend let me know that she and the then six kiddos she had at home (three of mine, three of hers) had moved to the closet and all was well.

At home, my two ladies, who are 11 and 10, were scared. They called me from the bathroom. (How did we used to live without cell phones?) The storm was now headed for them and they heard the sirens blaring and saw the clouds gathering. I told them to bring the dogs in the garage and stay put in the bathroom. I kept them on the phone with me (I still had the foils in my hair, squished into the bathroom of the salon with my new, and now quite close, friends). We talked about how they knew what to do. How I could not stop the storm. How they wished they had chosen to come with me and sit, instead of stay home and do chores. How they were scared, even if I was on the phone with them. How they wanted it to all be over. How we said a prayer together that they would be strong and be comforted and be clear. How they were prepared. And, how they were scared. I was scared, too.

The storm did pass. The ladies had talked through the whole experience, sitting in our bathtub with a mattress on their heads. I got home as quickly as I could, and I saw that limbs were down, trees were broken, and branches were everywhere, but, no major damage. The storm continued east, off to bother the residents of Tennessee.

(On a side note: my hair turned out fantastic! It is about two shades lighter than my stylist wanted, since the storm made us huddle in the bathroom when I should have been rinsing out the color!) 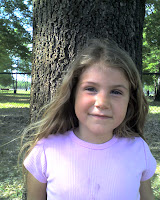 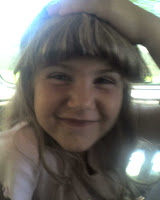 Charlotte was talking the other day about how hot it will be this summer with her long hair. That got us talking about hair cuts, and then we played a bit and discovered this - an "uncut" version of Charlie with bangs. What do you think?
Should Charlotte have bangs? 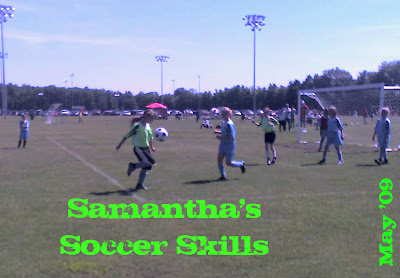 Samantha's Mean Green Soccer Queens still have three games left. So far, the tally is more wins than losses and the team has improved so much. It's so great to see them passing to each other, calling the ball and working together. As for Samantha, she has not been in the goal all season; she has been playing wing instead. She really likes it, and her favorite part is scoring goals. She has had three this season, and just this last game, she had two shots on goal that hit the post. 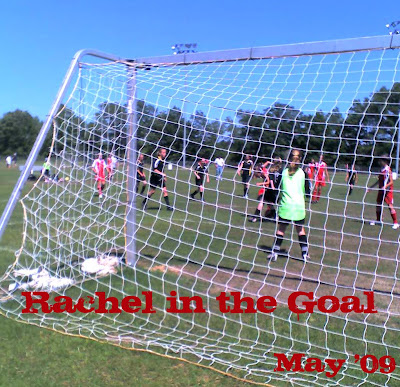 Rachel's Hornets are finished with their season and have a record of 4-3. I think. We have had so many games rained out, it's hard to say. Rachel, unlike her little sister, likes the position of goalie and she has done really well there. She likes the action and knows exactly what her job is, so it suits her well. Rachel plays with two of her friends from church and a few more girls from her school, so she enjoyed her first soccer season and wants to play again in the fall.