James and I are legal. 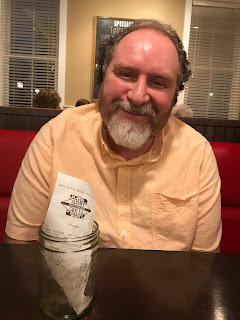 James and I were married on March 28, 1997.  This year on March 28, 2018, we are twenty-one!  I had a surprise in store for him this year.  He had a doctor's appointment in Annapolis, which means we had to cross the Chesapeake Bay and head into city life.  I'm not a fan of the cities, but, they have their good parts - doctors, for one, and secondly, restaurants.  I have a co-worker who told me of a place she and her family like to eat, located at the foot of the Bay Bridge, called Adam's Ribs.

Shut the front door.  James' and my first date was at Adam's Ribs.  That first date was on December 13, 1996, twenty-one years and three months ago.  Adam's Ribs in Salisbury, Maryland has since gone out of business, so I was excited to hear tell of another.  I told James we are eating out after your appointment.  Don't ask questions.  I know just where we are going.

James just loves seafood.  The Bay Bridge area is packed with seafood restaurants and he's itching to try every one of them.  As we sped past each of them on the way to the doctor, he said are we going there?  There?  How about there?  I just shook my head.  I'll never tell.  After the doctor, which went well, in case y'all are wondering, I directed him to Adam's Ribs.  He saw the sign as we pulled in the parking lot and smiled wide.  This is perfect, he said.  And it was.  We had ribs, and shrimp and appetizers and Smith Island Cake - his first - for dessert.  We hung out like adults and lingered over supper.  No kids.  No hurry.  It was great.  And just so that the universe could tell us one more time that we are doing things right - the check came in a Ball jar.  How confirming and sweet is that?