The Bigs take an Arkansas trip

Rachel's friend Grace was turning 18 and Rachel promised her when she left AR that she would return to AR to see her for the big day.  Rachel, Evan and Samantha took Evan's car and traded off driving.  Off they went.  The timing was pretty good, since school and jobs started after they were set to return home to MD. 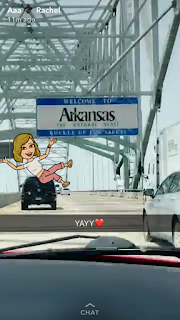 Samantha went along, to see Jonathan; she told him that she couldn't come because school was starting, then, she surprised him and jumped out of the car.  They had a great visit with their AR friends.  They also got to see PopPop Jim and Mammaw Jean - and go out to eat with them.  In these pictures, you can't see them, but, they are there. 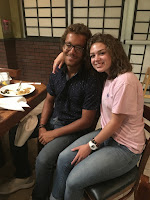 Then, well, then it happened.  The car died.  Yes.  Just died.  Apparently the engine needs something and I don't speak engine so all I know is that they had no way of getting back here.  I looked into buses and trains and planes and all of that was crazy expensive.  I was talking with my friend Krista, who was helping me get Samantha to pick up high school transcripts and ACT scores, and I told her of our problem. 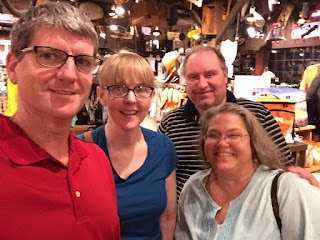 Next thing I know, I'm getting texts from Lynn, in red, saying, what if they had a ride halfway?  Could you meet someone in Tennessee?  Of course we could, and of course Lynn was talking about himself.  Lynn and Krista, just earlier this same week, had put their 18 year old son, Spencer, on a plane, bound for the MTC and his Spanish speaking mission in Idaho.  Lynn said to me, if Spencer can devote two years of his life to service, I can surely take a weekend to drive our friends' kids back home.  Dag.  Thank you, Lynn and Krista!  This is all of us at Cracker Barrel, somewhere outside of Nashville, TN, late late at night. 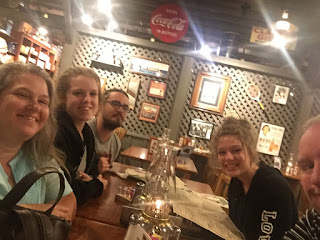 The Hazeslips got back on the road west to AR but we had supper and caught up.  We switched off drivers the whole way back to MD and made plans on how to get Evan's car fixed and how to get it back to MD.  More on that later. 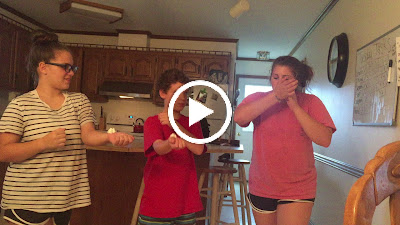 Meanwhile, at home in MD, mom came to "play" with the little three and they bought desks for their rooms and went out to eat.  I'm including this video here, even though it didn't happen exactly this same weekend (it was the week the Bigs were in AR).  A new game from the missionaries, who were over for supper that night.