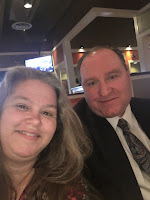 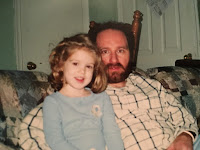 For Father's Day I wanted to add some pictures of the man who is behind all these BallTeam photos.  I don't have early enough of him on here.  That's partly his choice; he's very much behind the scenes.  But the absence of his picture does not change the fact that nothing here would be possible without him.  He is a great dad - devoted to his ladies and JMichael - completely behind them, even when they are wrong and he tells them so, he is there for them.  He is involved in their day to day lives I think more than most Dads because he is home all day and he is the one they go to when they are hurt, when we run out of toilet paper, or when they make an A on that project.  He cooks, he organizes and he keeps on top of bills and schedules (that's a lot for a busy family of seven).  I am thrilled to say that my kids will remember their childhood as a time they spent with Dad.  He's the one they can talk into taking us out to eat, or when they want a new pair of Converse he's the pushover.  He has a line - and the ladies and JMichael know what is expected of them, but, he's the one to ask if you want to stop and get a slushie on a hot day.  I knew on our first date - and so did he - that we would be married.  Almost twenty years later I still know he's my Beau.