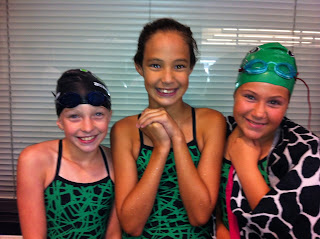 Another swim season is over.  Sad.  Charlotte (on the right) did great this year and we are so proud of her.  These three young athletes are Sarah Breedlove, Jessica Bongfeldt and Charlotte.  Together with Kyla Genenbacher they are the girls 100 meter freestyle relay champions of the Central Arkansas Swim League 9-10 year division.  They had a time of 1.05.92.  For those of you who don't speak swim, that's blazin' fast!  It's four laps of an Olympic size pool in just over one minute! 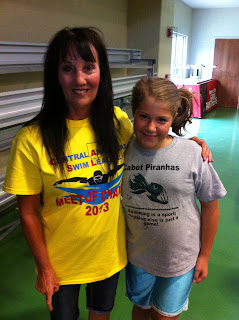 This is Charlotte with Coach Debbie Skidmore.  Coach Debbie is an institution in herself - this was her 14th season coaching Piranhas and her third season with Charlotte.  Charlotte loves her and we can only hope she'll stay another 14 years. 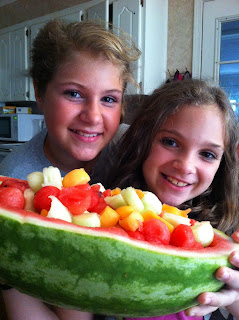 For the end of the season party we made a fruit salad in a watermelon bowl.  I had to include this because I don't do Martha Stewart too often.  When I do, and it works, I have to show off a little.  Plus, it's a great picture of my two beautiful little ladies. 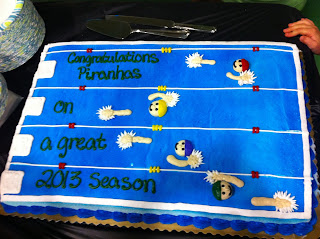 The cake at the after season party was cute.  That's Charlotte in lane one, in the green cap.
But seriously, for those of you who are numbers oriented, or just because I want to brag on her, here are her stats for the season:
50 meter freestyle:  34.24 (second place)
50 meter backstroke:  41.12 (sixth place)
50 meter butterfly:  38.30 (second place)
100 meter individual medley:  1:32:97 (sixth place)
Now, when I say second place, bear in mind that I am talking about a league wide ranking - eight teams all over central Arkansas.  All total, she was swimming against 116 other 9-10 year old girls, and she was the second fastest!  Or the sixth fastest!  WOW!
Outstanding job, Charlotte!