Charlotte joined the swim team at parks and rec in our little town. Practices started in April and continued through July. Once school ended, practice was every day and meets were on Saturdays. It was a pretty grueling schedule for a seven year old, but, since her friend, Sydney was also on the team and her Mom picked Charlotte up every morning at 8 am, we made it a habit to be up early in the summer. (I wasn't a complete slouch, I did the pick up and delivery home after practice....)
Her dive improved, her strokes improved, and now when we swim for fun, she gives pointers to everyone on how to swim. Charlotte is confident and ready to join again next year. I think we found her sport! 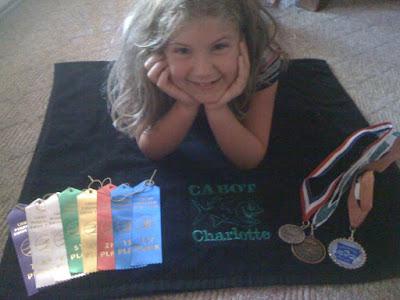 Charlotte with her ribbons, and her 'trophy' - the embroidered towel! (Isn't that cool?) The medals are (in order): qualifying for States, Coach's medal (she and Sydney won the coveted "comes to practice looking like she just rolled out of bed" award!), and Silver medal for girls 7/8 25 yard freestyle.

Some highlights: Charlotte qualified for the State Meet in two strokes: backstroke and freestyle. In freestyle, she finished second in the State for 7/8 year old girls. Fantastic, Charlotte! In backstroke, she would have finished fourth, but, she disqualified because she turned over at the very last second to reach for the timer/touch pad. Aw. To her credit, that was her first meet ever using a touch pad for time; she was used to just a kickboard to cushion her head and a timer standing over the pool. Still, she would have had fourth!
Some photos of the season: 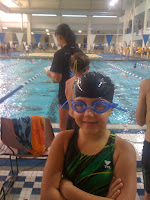 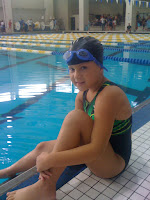 warm ups ::: waiting for her event 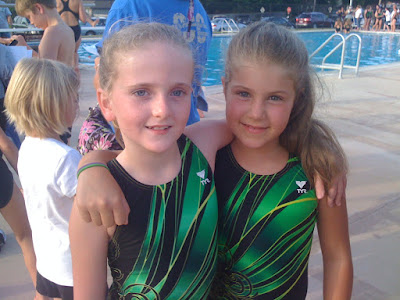 Sydney and Charlotte, Friends and Swimmers

This is my first before/after post. So many blogs out there are dedicated to the whole before/after conversations. I guess I just don't do much in the way of makeovers. Here goes my first one:

This bag was manly: so sturdy and grey. I loved the size and shape. I loved the inside zipper. What I did NOT love, was easy to fix - the Dickies label on the front and the dullness of it. Blah.

I have a wonderful friend named Katie. She sews, she cans, she sings, she climbs canyons. She rocks. ;} Check out her creations by clicking here. Once a month, she comes up with a craft idea, gets all the stuff together, makes a sample and invites everyone over to try it. I love these escapes where I can learn and hang out with my friends. Glorious.

My bag was the perfect fit for this month's project: fabric rosettes. Here is my made over bag, sporting two different looks: 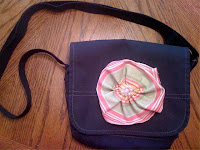 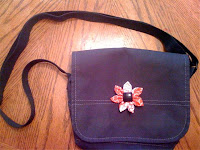 The red/white/black rosette was not my doing. Credit for that one goes to Tiffanie. She's also amazing. My other amazing friends that were there with us were Megan, Dawn and Brandy. Next month you are ALL invited! 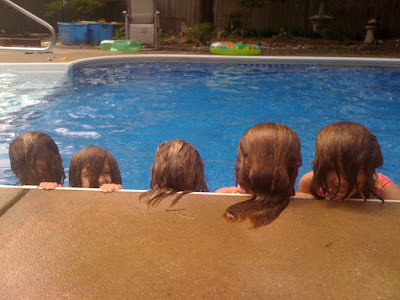 Quick: Can you identify the HairBalls? 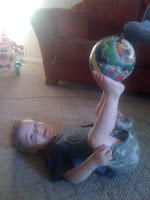 This is Jay's newest trick. I am such a proud Momma. Some kids are potty training at 2 1/2, or speaking in complete sentences. Not our boy. Nope. He can do all those things later. Today, he can balance a ball on his heels. I can't do video, or I would have included the second half of this trick, which is thrusting the ball as high as he can - usually a direct aim at the ceiling fan. He hasn't hit it yet. Maybe next week.

Our Fourth of July was very laid back this year. The great part is that laid back is perfect for the Fourth of July. Our kind of holiday. We had a long weekend with swimming: 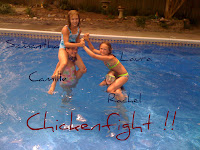 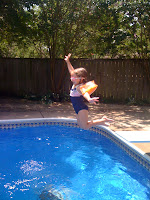 Our ward had a picnic with friends, food and fireworks. 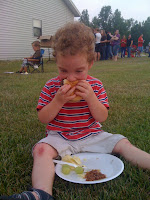 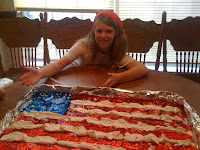 Rae made this dessert - it's jello and cool whip. It's a grand ole flag!
And we ended our three day holiday with the town's display of fireworks (thank you Bartletts for having us over! (Josephine took this picture of the fireworks!) 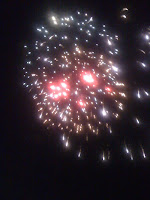 Also enjoyed but not pictured was plenty of watermelon, more time with friends and stories about Fourth of July celebrations past.
When the kids ask for bedtime stories, we have a tradition of Ancestor stories. It all actually started because picking out the book, deciding who sat where and turning all the lights on did more to rile everyone up than induce a sleepy atmosphere. So, with the lights off and everyone tucked, James and I tell stories. The ladies pick the person and subject. We come up with a story. Over the weekend, James and I got tell stories of our favorite fireworks and cookouts.
If you don't want to hear a possibly boring story, move to the next post. But, for those who may be remotely interested, let me tell you about the Fourth of July, 1976...
In 1776, the Declaration of Independence was signed. In 1976, the country celebrated - big time. I remember it clearly because we had special props and poses for our school pictures that year, we learned patriotic songs and had a big school production celebrating the Founding Fathers through song. We had fireworks for what seemed like weeks, we even had an Independence Day parade, a first for our little town. I was nine years old. The USA was 200 years old.
My parents threw a party at our house. We had crabs and oysters and hamburgers and homemade peach ice cream. My grandparents and aunts and uncles were there and lots of cousins. After all that food (and horseshoes and kites) we watched the fireworks from our front yard. I remember a crowd showed up. I think the whole Ward was there, because this particular year was the first summer in our new house plus, the fireworks were set off at the Civic Center, which was behind the cornfield across the street. We had front row seats at the perfect viewing distance! (Later that year we could watch as the Civic Center burned to the ground, too.)
I will always remember that Fourth as a great day in my carefree childhood. Surrounded by family, friends and food. When I was nine, that's what America was all about.

No, I'm not talking about Taylor Swift's album...
It's Jay who's fearless!! 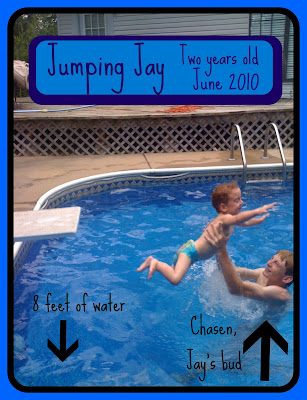