JMichael is Student of the Month

I am not a homeroom mom.  I do the occasional project for the teachers and James and I go to conferences with teachers, but, I am not a room mom.  Thanks to all the other women who have helped in my kids' classrooms over the years - not my scene.  Having said that, if my daughter or son is getting an award at an assembly, well, then, we are there.  Except for this one.  JMichael brought home a letter saying he was getting an award - he didn't know what for - and the assembly was at nine the next morning.  I can't make it, I apologize, and this sweet young man, says, no problem, you can take a picture of me when I get home.  So, I did.  Then we called Domino's and ordered his free small pizza he was given.  "Student of the Month"  That was out of the whole school - not a big school, but, there are at least two classes of each grade - kindergarten through fifth. 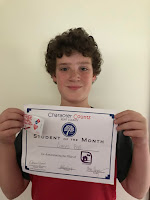 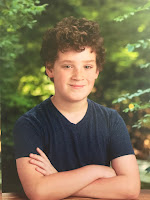