By way of background, I left my job at a law firm in Cabot in February, 2017.  We had a parting of the ways.  It ended fine, no hard feelings, but, I was on the job hunt for a few months, when James told me for the one-hundredth time, why are we still in Cabot?

But should we?  We have so many friends in Cabot that I found it so hard to imagine our family living anywhere else.  The kids had essentially grown up here.  We came to Cabot after Hurricane Katrina and we were welcomed like royalty.  The crime rate is low; we never lock our doors.  The doctors are good, and the big city of Little Rock is easily accessible.  Again, so many good friends to James and me, but, also to our kids.  Why move?  James loved his calling; his Dad was close by.  Why leave that?

Because we should.  Because it's time.  Because there's a whole world out there and we have only been in one corner of it.  So here we go.

I looked on Craigslist and found a solo practitioner who was advertising for help.  I  knew the town where he practiced because I had gone to college there.  It was forty five minutes south of my mom's house and an hour north of my brother's house.  I applied.  They called and said, so I have your resume and I'm interested but there's one big elephant in the room - you are in Arkansas.  I said, yes, sir, I am.  But, I can be in Maryland, just give me two days.  That was a Monday, we set up an interview on Friday and on Wednesday, James and Charlotte, Josephine, JMichael and I all left for Maryland.  Samantha could not miss school (she couldn't even be late) and she had to work, so we left her home.  We arrived at Mom's, I interviewed on Friday and he said, you are great and I would hire you and you could start on Monday, but, again, you live in Arkansas.

I said here's what I think.  I think I drive back to Arkansas with my family.  I will fly back here alone on Wednesday.  I will work for you for two weeks and then I'll leave for my daughter's graduation, to pack a house and move my family, then I'll be back here by June fifth to start permanently.  The leave and come back was James' idea.  It also allowed me time here to look for a place to rent.  Win/win!

And my new boss said, that works for me.  You're hired. 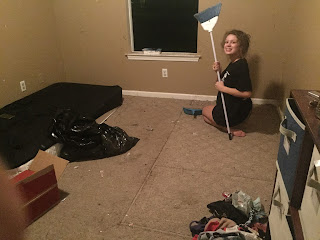 Moving is work.  Samantha breaking down her room. 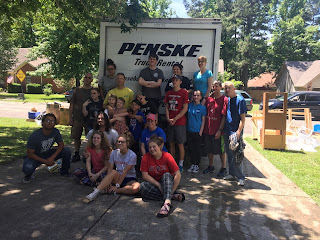 Our crew of magnificent loaders.  We had packed the house and filled the garage.  They had it all in the truck in about two hours.  Amazing teamwork. 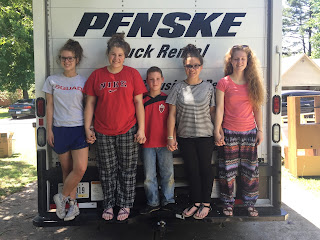 the BallTeam - last photo in Arkansas!

And so, after having three of my first five weeks of work off, I am now working full time in Chestertown.  We are living a little north of here until we decide where we want to buy a house.

I'm making more money; the kids are excited about the new scenery.  JMichael is just excited.  He's a happy kid.  Charlotte left behind the horrible end of the year drama she had in Cabot, saying good riddance and I'm off to conquer new worlds.  Josephine was excited to get the GT placement letter in hand and leave town, though for her saying goodbye to friends was a lot harder than anyone saw coming.  Lots of tears from her and her sweet group of buds.  Samantha was excited to get here and is loving not working, just tanning and relaxing.  She misses JonBoy, her boyfriend, who plans to come see her for her eighteenth birthday next month.  Leaving was harder than she thought.  JonBoy was there for every stage of it and she had a group of about five friends there with her until we pulled away from the house.  She cried until we got to Tennessee, then, though still sad, she started to look into the adventure and move on.  She still misses AR.

Rachel, meanwhile, stayed in Arkansas.  She and her boyfriend, Evan, will be coming out here in mid-July, after they have all their loose ends wrapped up.  Out of respect for his parents, Evan wanted to give them more time to accept his decision to move east, and they have both given notice at their jobs and have started packing.  We miss them.  I understand how Evan's parents must feel, but, the kids are 22 and 19, so they can decide.  I'm just thrilled they will be here soon. 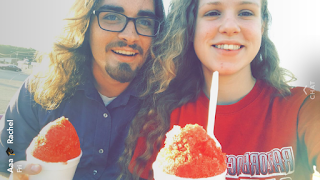 So now we live in Maryland.  It's coming home for me.  It's a new adventure for everyone else.  James lived very briefly in Maryland when we met, but, not in this part.  We are eight miles from the Chesapeake Bay, one hour from the Atlantic Ocean and surrounded by fields of corn and summer wheat.  We are about thirty five miles from Walmart, thirty miles from the church building and we have literally resigned ourselves to the fact that we will be in the car more than ever.  We are about an hour and a half from Washington, DC, Baltimore, MD or Philadelphia, PA.  I see lots of football games, museums, and concerts in the coming years.  The east is so full of history and beauty; I'm glad to be home to share it with my BallTeam. 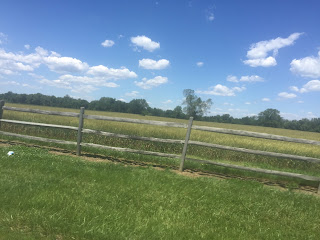 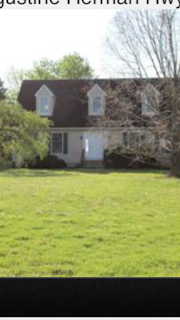 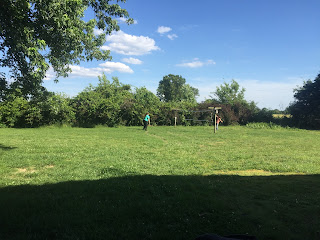 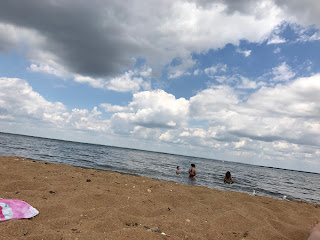 our beach
Please come see us!  We can hit the Smithsonian or the beach - y'all choose.  Or better yet - both!