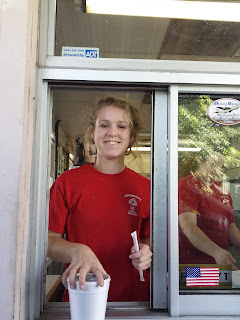 Rachel, at 17, has quit two jobs.  She was working at Tropical Smoothie and was unhappy from the start.  She liked the laid back customer atmosphere, but, she soon discovered that the employee situation was not so laid back.  She was working the food line - making sandwiches and wraps - and using the skills she had honed from Subway.  She liked the atmosphere at Subway with its friendly do it yourself vibe and fun people to work with.  She thought the grass would be greener at Tropical Smoothie so she jumped ship.  Within two months, she walked out of Tropical Smoothie - mid lunch rush - because she was being blamed for something she did not do and something she had put up with over and over again.  They pushed her too far and she snapped at them and walked out.  Another girl followed her.  It was a very short and condensed movement, but, she made herself heard all right.

After a bit of job searching and taking a break by heading out on a road trip with Ma, she landed herself a new job - Tasty Freeze.  She loves it.  She gets to work the heavy equipment like the fryers and the grill.  She makes ice cream cones for little kids and little league teams.  She also makes something else she has quickly learned to like - TIPS.